Chapel Hill, N.C. — A fourth person has been charged with pulling down a Confederate monument on the University of North Carolina at Chapel Hill campus during a protest last week, UNC police said Thursday.

The news comes after a few people appeared in court Thursday morning on charges in connection with the Aug. 20 protest and a clash last weekend between supporters and opponents of the "Silent Sam" statue and before another planned protest at the monument site.

Margarita Sitterson, 18, a UNC-Chapel Hill student, has been charged with causing a public disturbance and defacing a public monument, both misdemeanors. It's unclear when she was charged.

Jimenez appeared in court Thursday, along with Danielle Shochet, 47, and Barry Brown, 41, who were both arrested on simple assault charges in a protest last Saturday. Seven other people were arrested during that incident.

The courtroom was filled with "Silent Sam" opponents, and immediately following the court hearing, Jimenez joined supporters outside the courthouse to speak about the removal of "Silent Sam."

They said the charges should be dropped against all of the protesters, and argued that UNC-Chapel Hill officials are spreading a false narrative that the statue was felled by "outside agitators" since most of those charged in the case aren't affiliated with the university.

The following people have been arrested in connection with demonstrations related to the "Silent Sam" Confederate monument on the UNC-Chapel Hill campus:

"Drop all these charges for everyone that's been involved in this movement, and stop calling them outside agitators," said Altha Cravey, an associate professor of geography at UNC-Chapel Hill.

Speakers said students and faculty have been working for years to remove the Confederate monument through legal channels, and Jimenez said those efforts just weren't working.

"There's been a lot of fight over this. Folks have requested it, sent letters, signed petitions, and it just didn't happen, because Chancellor Folt and the Board of Governors were not listening," he said. "When the law doesn't let the community take down monuments to white supremacy and racism, the community will take them into their own hands.

"It was people power that removed 'Silent Sam,'" he said.

One woman stood across the street from the rally holding a sign in support of Brown, the only "Silent Sam" supporter arrested in last week's protests.

"All he was doing was holding a flower in his hand, and they tried to take it, and he defended what was his personal property," Judy Stewart said of Brown, who was arrested after punching a protester.

Chapel Hill police chief told officers to 'stay way out' as Confederate monument was toppled; one officer put on leave amid concerns over tattoo

Meanwhile, Chapel Hill and UNC police were preparing for the possibility of another demonstration on campus Thursday night.

The university sent an email overnight to students and staff, encouraging them to stay away from McCorkle Place, where the "Silent Sam" Confederate statue was toppled last week. The town followed the example by asking residents to stay away from Franklin Street.

On Thursday afternoon, the university said that, starting at 6:30 p.m., East Cameron Avenue will be closed to through traffic between Columbia and Raleigh streets. The school said the Cobb Deck, the Bell Tower Deck and the Raleigh Road Lot will be available for parking. 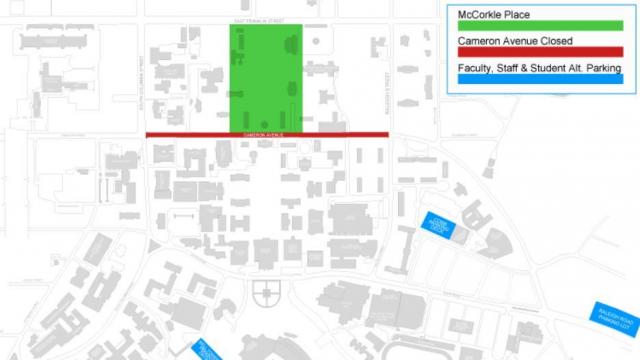 Police were planning for violence, as two opposing groups were expected to rally – one against "Silent Sam" and a group from Alamance County that wants to see the statue back on its pedestal.

Fliers have circulated from a group that says the monument condones racism and shouldn't be on campus.

The UNC Board of Governors gave Chancellor Carol Folt and the UNC-Chapel Hill Board of Trustees until Nov. 15 to devise a plan for the fate of "Silent Sam."

Hundreds of alumni and faculty members have signed petitions to keep the statue down, and members of the Chapel Hill-Carrboro Chamber of Commerce and the Chapel Hill Downtown Partnership sent a letter to Folt Thursday to join the cause. The two business groups said putting "Silent Sam" back up endangers people's safety, costs local businesses money because they have to shut down before protests and damages Chapel Hill's reputation.