Raleigh, N.C. — Sixty law enforcement officers started a journey from Raleigh to Washington, D.C. on Monday to honor fallen officers and raise money for their loved ones.

The group of bikers, which is made up of active and retired officers from 20 agencies from North Carolina, Maryland, Minnesota, Texas and Virginia, gathered at Raleigh City Hall starting at 6 a.m.

The ride started at 7:30 a.m. with a stop at State Patrol Headquarters in Raleigh at their memorial wall for fallen officers. The group will bike to Chesapeake, Virginia, where they'll meet more than 250 other officers before heading to Washington. The entire trip is more than 500 miles. 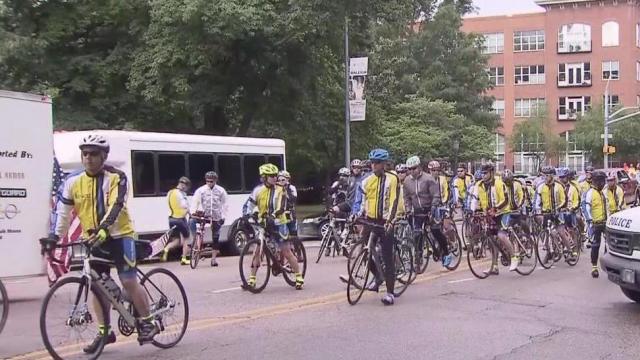 On their minds during the ride will be Mooresville police officer Jordan Sheldon, who was shot and killed Saturday night while conducting a traffic stop.

The ride, which is part of National Police Week, will use money raised from the event to send surviving children and spouses to a summer camp.

This will be the bicycle trek's sixth consecutive year.