The 2013 General Assembly session by the numbers 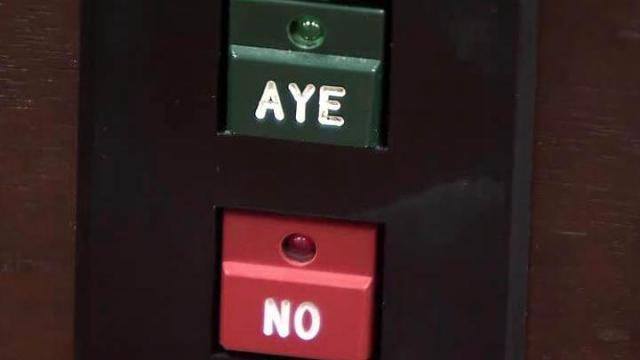 Raleigh, N.C. — One of the most basic duties a lawmaker carries out during session is mashing the red or green button during recorded votes on the House or Senate floor. While plenty of hard bargains and hard luck lurk behind the numbers, vote totals can tell part of the story behind the 2013 legislative session.

House lawmakers cast a total of 1,352 recorded votes during the 2013 legislative session. During the session, lawmakers may request and receive excused absences. The House clerk's office does not count votes cast during those absences as missed votes. However, the tallies can be recalculated to examine the actual number of votes missed during a session.

Using that recalculated total, an individual state representative could be expected on to participate in 86.1 percent of recorded votes during the six-month legislative session.

"I've cast every vote since I cast my first one in 2005," Dollar said. "I made a commitment in the 2004 election (that) I would be there on the job casting votes for the citizens of the 36th District."

A lot has changed since Dollar started serving in 2005, when he was in the minority party. Now, he is a member of the legislative leadership responsible for building the annual budget. Often, legislative leaders miss votes because they have to negotiate with their counterparts in the Senate or work with staff on complex legislation.

Dollar said he doesn't let his committee responsibilities draw him too far from the chamber. In addition, technology that allows him to monitor the session via smartphone and a helpful heads-up from the sergeant-at-arms staff brings him back in time for votes.

Most missed votes: Rep. James Langdon, R-Johnston, missed the most votes of any state representative who served for the entire session. He cast only 75.5 percent of all votes. Rep. Sarah Stevens, R-Surry, missed the second-most votes, casting only 78.6 percent of recorded votes. A spokesman for the House Speaker's office said Langdon had health issues that kept him out of the chamber, while Stevens was helping to care for a sick family member.

Reliably red: Rep. Susan Martin, R-Wilson, voted most often with the majority, 98.8 percent of the time. There were 15 other members of the House who voted 98 percent or more with the majority, including members of the GOP leadership team, such as House Speaker Thom Tills, Finance Committee Co-Chairman David Lewis, R-Harnett, Judiciary Committee Chairman Leo Daughtry, R-Johnston, and Republican Conference leader Ruth Samuelson, R-Mecklenburg.

The loyal opposition: Rep. Grier Martin, D-Wake, voted against the majority more than any other single representative, but his numbers were exaggerated because he served only half of the session. Of those who served a full term, Rep. Pricey Harrison, D-Guilford, voted against the GOP majority the most, 74 percent of the time. She is virtually tied with Rep. Paul Luebke, D-Durham.

Most missed votes: Sen. Clark Jenkins, D-Edgecombe, missed the most votes. He was recorded only 613 out 913 times, or 67.14 percent. It’s worth noting that, under the Senate's own measure for missed votes, Jenkins made 95.5 percent of votes.

Reliably red: Sen. Rick Gunn, R-Alamance, voted more often with the Republican-led majority than any other senator. He cast his lot with the GOP 99.8 percent of votes. Gunn bucked his party on only one vote: The bill in question dealt with shielding matters of judicial discipline from public view. Gunn’s percentage of voting with the majority slightly outstripped that of Sen. Phil Berger, R-Rockingham, the Senate’s leader.

Of course, no Republican Senator voted against the majority more than 3.1 percent of the time, a sign of how tightly knit the Senate GOP caucus is. It also raises the distinct possibility that some Republican senators "took a walk" and did not vote on legislation in which their vote would conflict with their leadership's wishes.

Loyal opposition: Sen. Gladys Robinson, D-Guilford, cast the most votes against the will of the GOP majority. She voted with the winning side on recorded votes only 76.2 percent of the time.