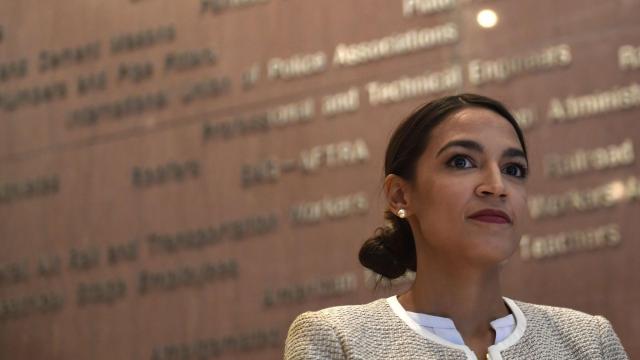 Ocasio-Cortez was in Washington for freshman orientation along with other newly elected members of Congress.

Ocasio-Cortez brushed off questions Tuesday when asked about Pelosi's leadership.

A number of incoming freshman Democrats, including the New Yorker, publicly raised doubts about Pelosi's leadership on the campaign trail, with some vowing to oppose her election as speaker. Pelosi has said she's confident she'll reclaim the role.

Ocasio-Cortez struck a conciliatory tone on Tuesday despite joining the protest.

She added, "One of the things that I admire so much about Leader Pelosi is that she comes from a space of activism and organizing and so I think she really appreciates civic engagement and really what I'm here to do is just to support the folks that are here."

Pelosi issued a statement Tuesday after the sit-in reiterating her intention to ask for a special committee on climate change in the new Congress, prompting a thank-you tweet from Ocasio-Cortez.

Her statement was met with a sharp response from the Sunrise Movement, an advocacy group pushing for a New Deal-style program to tackle climate change, which organized Tuesday's sit-in.

"We welcome Nancy Pelosi's support, but words are not enough. 42 have perished in Pelosi's own home state of California from drought-driven fires in the last few days alone," they said in a statement. "Her solution is to resurrect a committee with no funding and no power to take legislative action."

"If Pelosi fails to issue this mandate," the group added, "it's time to step aside."

A statement earlier in the day called for "a Green Jobs for All Program that would put millions of people to work stopping climate change and transforming our economy."

The Justice Democrats, another group that was among Ocasio-Cortez's earliest backers, is also pressuring Pelosi and House Democrats to devote more attention -- and political capital -- to climate change issues.

"Anything less is tantamount to denying the reality of climate change," Justice Democrats communications director Waleed Shahid said in statement Tuesday. "The hopeful part is that we're ushering in a new generation of leaders into the Democratic Party who understand the urgency and will help build a movement to create the political will for bold action."