Obamacare Is Proving Hard to Kill 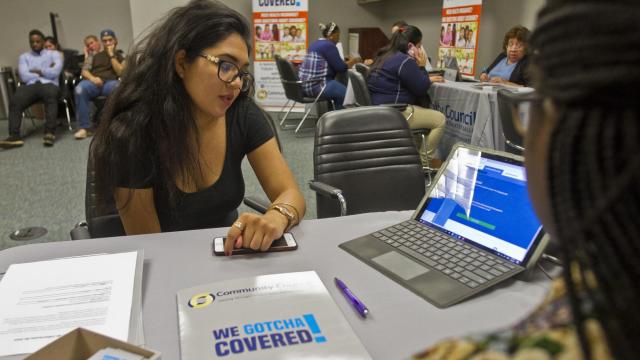 As health insurers across the country begin filing their proposed rates for 2019, one thing is clear: The market created by the Affordable Care Act shows no signs of imminent collapse despite the continuing threats by Republicans to destroy it.

In fact, while President Donald Trump may insist that the law has been “essentially gutted,” the ACA market appears to be more robust than ever, according to insurance executives and analysts. A few states are likely to see a steep spike in prices next year, but many are reporting much more modest increases. Insurers don’t appear to be abandoning markets altogether. In contrast to last year, regulators are not grappling with the prospect of “bare” counties, where no carrier is willing to sell ACA policies in a given area.

“The market is in a better position now than it has ever been since the exchanges have opened,” said Deep Banerjee, who follows insurers for S&P Global Ratings. The companies first began selling policies in the state exchanges, or marketplaces, five years ago. After years of losses, the insurers are now generally making money.

With roughly a third of states releasing information, the insurers’ rate requests vary widely, according to an analysis by the Kaiser Family Foundation. In Maryland, companies are seeking increases averaging 30 percent. A midlevel policy in Baltimore could cost $622 a month, roughly a third higher than the average of the other states reporting to date.

In Minnesota, which created a reinsurance program to help pay for customers’ expensive medical conditions, carriers are actually seeking lower premiums. A midlevel policy in Minneapolis is priced at $302 a month.

The political and legal turmoil in the market is likely to persist, and final premiums will not be established for months. States are still working out details of some of their proposals to stabilize their own marketplaces. Those could be blocked by the federal government or a federal court, as in the case of Friday’s decision regarding the work requirement sought by Kentucky for its Medicaid program.

“We will start seeing more variation in the coming years, not just in premiums, but what rules the states are enforcing,” said Cynthia Cox, a policy expert at the Kaiser foundation.

Insurers are also watching the developments in the Texas lawsuit brought by Republican attorneys general. The Justice Department recently sided with the Republican states in arguing that the provisions protecting people with existing medical conditions are unconstitutional, which would upend the market entirely.

But for now, insurers are comfortable with the market as it has come to exist even with less federal support for the law. “The business has stabilized, and we’re confident,” said Brian Lobley, an executive with Independence Blue Cross, which offers plans in Pennsylvania and New Jersey. Insurers in Pennsylvania are seeking average increases of just under 5 percent, according to the state insurance department. Other states, including Florida, Indiana, Michigan and Ohio, could also see single-digit increases.

Still, steadily higher prices are driving away more people who cannot afford those rising costs. People whose income levels are low enough to qualify for federal tax credits are largely insulated from price hikes because the credits they receive increase to cover the higher premiums. Individuals can use the credits to help pay for their monthly premiums and, in some cases, are able to cover the entire cost of a plan.

But the number of people buying ACA plans at full price dropped by roughly 20 percent from 2016 to 2017, according to new federal data. While some people may have qualified for subsidies for the first time because of the higher prices, about 1 million people appear to have stopped buying coverage.

Premiums soared an average of about 30 percent in 2018 for those who did not qualify for a federal subsidy. Overall enrollment has declined from its peak in 2016, according to federal data released Monday, with 10.6 million customers buying plans in the state marketplaces for 2018.

Of those, the overwhelming majority — 9.2 million — qualify for some federal assistance. “The premium tax credits have made the market extremely resilient,” said Sabrina Corlette, a research professor at Georgetown University.

The field of fewer customers has not scared off the surviving companies. Some insurers, ranging from Centene, the market’s largest player with 1.6 million customers, to Oscar Health, the venture-backed outfit that struggled in the early years, are expanding next year. More than a dozen carriers are entering new markets.

“We believe the market is going to be a largely stable market,” said Mario Schlosser, the chief executive of Oscar, which has watched its profitability improve. The company wants to nearly double the number of places where it sells policies, including entering three new states: Arizona, Florida and Michigan.

Nevertheless, Republican efforts to unwind the law are having some effect. The tax overhaul law eliminated the tax penalty that people had faced if they refused coverage, doing away with the individual mandate that encourages healthier people to enroll. The administration has also been pushing the adoption of much cheaper and flimsier policies that compete with ACA plans by issuing new rules on association plans.

“I have to give a fair amount of credit to the Trump administration,” said Mike Kreidler, the Washington state insurance commissioner and a proponent of the federal law. In Washington state, the insurers want to raise premiums by an average of 19 percent after hiking prices by 36 percent for 2018. Without the administration’s actions, he said, rate increases would have been in the single digits for 2019.

In New York state, about half of the 24 percent increase being sought by insurers is because of the removal of the mandate. Insurers think fewer healthy people will enroll without a penalty in place, leading to sharply higher premiums because the remaining pool is sicker.

Most Americans are not affected by the travails of the individual market. In the much larger employer-based market, where some 150 million people get their insurance, companies generally pay the bulk of the premium. Underlying medical costs are forecast to go up around 6 percent next year, in line with recent increases, according to PwC’s Health Research Institute.

While there is some debate, the percentage of people who are uninsured appears not to have grown since Trump took office: it’s been about 9 percent since 2015.

Depending on where people live, their choice of plans and the prices they pay will differ dramatically next year. “The experience will be a hodgepodge across the states,” said Chet Burrell, the former chief executive of CareFirst, the Blue Cross plan that sells ACA policies in Maryland and Virginia. Some states, like Minnesota, where some carriers propose to drop prices by as much as 12 percent, are setting up a reinsurance program like the one that had been discussed but not adopted on a federal level. Maryland is awaiting federal approval for a similar program that could significantly lower prices in the state.

In Washington state, lawmakers were unsuccessful in their attempts to create a reinsurance program, said Kreidler, the regulator. “We ran into the same problem some other states did — it’s tough coming up with the money,” he said.

Other states may restrict the sale of policies that compete with the ACA plans or develop their own version of the individual mandate.

But insurers are increasingly comfortable with the current state of the market. In Iowa, Medica was the only remaining insurer in 2018 after the dramatic exit by the state’s Blue Cross plan. The insurer increased its prices there by nearly 60 percent this year. For next year, it is contemplating increases in the single digits, and Wellmark, the Blue Cross plan, said it would get back into the Iowa market in 2019 after talking with state officials.

Citing the relative stability in the environment, Medica also plans to expand into two more states in 2019. It says it is able to factor in the continued uncertainty over the influx of new competing plans. “We have had to become pretty nimble and pretty flexible,” said Geoff Bartsh, an executive with Medica.

Most insurers think the Republicans will not be successful in their legal efforts to undo the law, and they are holding off on making any dramatic moves. But that could change if the courts rule in favor of the Trump administration and the Republican attorneys general. “The big game changer would be the lawsuit in Texas,” Bartsh said.

Despite the market’s rockiness, insurers are discovering their customers were loyal. “Last time, they tried everything,” said Michael Neidorff, the chief executive for Centene, including eliminating the subsidies aimed at reducing people’s out-of-pocket costs if they were low income and slashing the outreach efforts. But Neidorff said the vast majority of people remained enrolled. “People want insurance,” he said.

Those who can afford coverage are also remaining because they have little choice. “It’s a very price inelastic set of enrollees,” said Caroline Pearson, a senior fellow at NORC, a research group at the University of Chicago, who says insurers have become less concerned about the price increases.

They are resigned to offer coverage in a smaller but stable market, Pearson said. “They are a very hardy bunch,” she said. “They have been through a lot.”