Obama: No American should be 'targeted because of who they are' 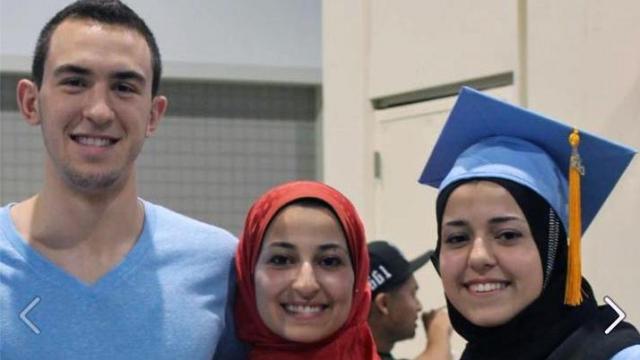 "No one in the United States of America should ever be targeted because of who they are, what they look like or how they worship," Obama said in a statement.

Craig Stephen Hicks, 46, who lived in the same condominium complex as the victims and has described himself as a "gun-toting atheist," is charged with three counts of first-degree murder. He is being held at Central Prison in Raleigh.

Police have said the killings appear to be the result of a long-running dispute over parking spaces at the complex, but the father of the Abu-Salha sisters has called the shootings a hate crime because all three victims were Muslim.

The FBI opened an inquiry into the case on Thursday, and agents met Friday morning with federal and Durham County prosecutors and local police. In addition to Hicks' apartment, investigators are searching his computers and cellphone.

The case could go before a grand jury as early as Monday, but prosecutors said no decision has been made on whether to seek the death penalty.

Obama's statement came one day after Turkish President Recep Tayyip Erdogan criticized him and other U.S. officials for not speaking out against the killings. Erdogan called the silence of the Obama administration "meaningful."

Barakat was planning a trip to Turkey to provide dental care for Syrian refugees, and the American Turkish Association of North Carolina praised him, saying in a statement that "his outstanding effort to help the disadvantaged half way around the world speaks volumes of his respect for humanity and human life."

An estimated 5,500 mourners gathered Thursday in Raleigh at a solemn funeral and prayer service for the three students. Relatives viewed the victims' bodies in a small building near one of the area's largest mosques, where the two families have long been members. Because of the sizeable crowd, the service was then moved across the street to athletic fields owned by North Carolina State University, where Barakat and Yusor Abu-Salha had graduated and Razan Abu-Salha was a student.

Vigils have been held at both N.C. State and UNC-Chapel Hill in honor of the three, and Muslim groups held prayers in front of the White House on Friday to press their demands for a federal hate-crime investigation.

"Michelle and I offer our condolences to the victims’ loved ones," Obama said. "As we saw with the overwhelming presence at the funeral of these young Americans, we are all one American family."