Oasis in the Mojave, Protected but at Risk 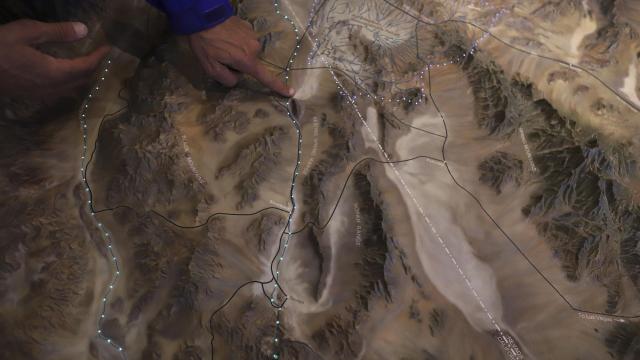 SHOSHONE, Calif. — The Amargosa, a slender thread of a river that flows through a parched landscape, begins with a few springs bubbling out of the ground in the Oasis Valley near Beatty, Nevada.

Shortly thereafter, the stream disappears underground, and it flows south hidden for 100 miles or so until surfacing again near this desert outpost, home to 31 people.

From here, the Amargosa, nicknamed the hide-and-seek river, alternately flows above ground and below, mixing with groundwater and water heated by geothermal sources in a complex subterranean puzzle. The river is nourished by an assortment of springs and creeks, and though its Spanish name means “bitter,” the water is sweet enough to cultivate a string of biological pearls along its length.

“Places where water surfaces in the desert are rare, and that’s where biodiversity is high,” said Sophie Parker, a senior scientist with the Nature Conservancy in Los Angeles, which has helped buy and protect key areas along the Amargosa. “These are true oases.”

The Ash Meadows National Wildlife Refuge, part of the Amargosa River system, hosts more endemic species — those found nowhere else — than any other place in the United States, surpassed by only one other location in North America, a desert oasis in Mexico. Some species of snails and fish exist only in a single pool in the Amargosa region.

All this in a place that is one of the hottest and driest places in North America. Just a few inches of rainfall here annually, and temperatures routinely soar to well over 100 degrees Fahrenheit. Nearby Death Valley holds the record for the world’s all-time hottest temperature: 134 degrees in 1913.

Many of the region’s most stunning features — deep turquoise springs, warm pools, hanging gardens — are protected in Ash Meadows, where 11,000 gallons of water pour into desert pools each minute.

The Amargosa is protected along an aboveground length of 15 miles. Piecing together the oases needed to conserve disparate species here has taken decades.

The Ash Meadows refuge, for example, was slated to be the Calvada Lakes housing development — including more than 30,000 homes, golf courses and strip malls — when the Nature Conservancy bought it in 1984 and donated it to the federal government. Conservationists and refuge employees have been working to restore the landscape ever since.

There are persistent threats along the Amargosa, despite its protections. Work crews have removed miles of invasive tamarisk trees, for instance, because they take up and transpire so much of the river’s water. But the federal and private protections are useless against the biggest threat of all: the pumping of groundwater from the giant underground aquifer that feeds the Amargosa, which eventually could throttle the river and the delicate ecosystems it supports.

Much of the regional groundwater system that feeds these protected features comes from the flanks of Yucca Mountain, some 70 miles or so to the north. The Trump administration and Congress are working to restart moribund efforts to bury nuclear waste in the repository there.

While there is concern that someday — centuries or millenniums in the future — radioactive waste could contaminate the water in the Amargosa watershed, the more immediate threat is the need to pump enough groundwater to support the huge repository infrastructure.

“That would require thousands of acre-feet of water per year for up to a century,” said Robert J. Halstead, executive director of Nevada’s Agency for Nuclear Development, which opposes a Yucca Mountain repository. “That would clearly threaten the sustainability of the groundwater resource in Amargosa Valley.” Already residential growth in Pahrump, Nevada, is soaring, and the only source for water are wells punched into the Amargosa portion of the groundwater system.

And there are numerous efforts in Congress to weaken the protections of the federal Endangered Species Act, which experts say might affect conservation efforts here.

The vast Mojave Desert is a moonscape, hardened mud and rock, devoid of vegetation in many places and so barren that parts of it were occasionally used as the set for the fictional desert planet Tatooine in some of the “Star Wars” films.

Along the Amargosa, however, willows and mesquite grow in thick groves, providing habitat for hundreds of bird species, such as the endangered least Bell’s vireo and Southwestern willow flycatcher. The endangered Amargosa vole relies on marsh habitat just outside the trailers and shacks of the desert town of Tecopa. And the alkali Mariposa lily and ash meadows blazing star are among the plants that grow only along this river.

A Tiny Fish in Danger

But the greatest threat of groundwater pumping is to several species of inch-long pupfish, tiny iridescent blue fish so named because they seem to play with one another like frisky puppies.

The pupfish’s size belies its long, controversial history. One pupfish species inhabits the small, deep crack between rocks in just a single pool that is now locked behind steel fences and barbed wire and watched over with cameras and other security. Some 10,000 years ago, a series of connected lakes and rivers fed by Mono Lake covered this region. As the waters receded, the fish were stranded in a series of isolated pools and stretches of river.

Over time, these isolated fish populations adapted to desert conditions so harsh that the animals are now considered extremophiles, like the tiny crabs clinging to volcanic vents deep in the ocean.

“I’ve seen pupfish in a 16th-of-an-inch of warm water, lying on their sides eating algae,” said Len Warren, the river’s project manager at the Nature Conservancy.

The legendary Devil’s Hole pupfish is the world’s rarest fish species and one of the first species in the United States to be listed as endangered. It lives in a pool in a limestone cave so deep that divers have not been able to find the bottom.

But the 150 or so pupfish that live here breed and die almost entirely on a rock shelf no bigger than a large tabletop, which sits several inches below the surface in water that is 93 degrees all year and has extremely low oxygen levels. It’s the tiniest habitat of any endangered vertebrate species. The population at Devil’s Hole has been dropping in recent years, and the pupfish’s existence remains precarious.

Groundwater depletion is the biggest threat. In the 1960s, pumping on a nearby ranch began to dry out the shelf. A legal fight over water rights and the Devil’s Hole species went all the way to the Supreme Court. In 1976, the justices upheld the federal government’s water rights in the national monument, and pumping was halted.

But pumping farther afield has continued — the vast underground aquifer is the only source of water in this desert — and experts say there is strong anecdotal evidence that levels in some springs are dropping.

Climate change plays a role, as well. The average temperature in the Mojave has increased some 3 degrees in recent years, and warming of another degree or so could prevent the Devil’s Hole pupfish, which already has poor reproductive capabilities, from propagating at all. The geology of the aquifer that supports these oases is complex and poorly understood. An 8.1-magnitude earthquake 1,500 miles away in Mexico on Sept. 8, somehow caused 5-foot waves to slosh in the Devil’s Hole pool and destroyed much of the food the pupfish depend on. Even earthquakes in Japan and the South Seas have shaken the hole.

In 2016, three residents allegedly broke through the fence that guards Devil’s Hole and sprayed gunfire, took off their clothes to soak in the hot water, threw up in the pool, and left a pair of boxer shorts in this critical fish habitat. They killed at least one fish. They were caught on camera, arrested and charged with felonies.

In the early 2000s, biologists here accidentally killed roughly a third of 250 or so pupfish when they left fish traps nearby and a flood washed them into the hole.

Numbers have dropped into the thirties twice, including in 2013, from a high of 400 to 500 in the 1960s. It’s not known if such a low population may already have lost the genetic variability needed to sustain it.

In 2013, a 110,000-gallon fish-breeding facility with a fiberglass replica of the Devil’s Hole was opened, at a cost of $4.5 million, to grow a “lifeboat population” in case the species blinked out from a cold snap or something else in the wild. They are carefully monitored, and fed organic blueberries and cilantro.

“As soon as they spawn, every fish, including the parents, try and eat the eggs,” said Olin Feuerbacher, the lead aquaculturist here. There are about a hundred pupfish now in the replica.

The number of endangered and extinct species here speaks to the precariousness of life in the Mojave. The Tecopa pupfish is extinct because a local hot springs facility drained its habitat. The marsh of the endangered Amargosa vole — which numbers a few hundred — was accidentally drained by a road crew last year. The dried-out marsh caught fire, destroying 10 to 20 percent of the vole habitat.

Vole numbers are so low that the species is being bred in captivity at the University of California, Davis. Still, the Bureau of Land Management, which manages this refuge, allows people to soak in a hot springs adjacent to the vole’s habitat. Losing the Amargosa would throw a monkey wrench in the plans of Susan Sorrells, who owns Shoshone — the bar, restaurant, motel and houses — and 2,000 acres around it. Her great-grandfather founded the town as a commercial center to support the borax mines here in the 1800s.

Behind Sorrells’ recreational vehicle park is a series of pools, habitat for the endangered Shoshone pupfish that she has improved as a draw for ecotourists — birders, hikers and “extreme heat tourists,” especially from Europe, who come to experience searing desert temperatures, often buying a dozen eggs to take into Death Valley and cook on a broiling parking lot.

When she started restoration, Sorrells discovered the last 80 Shoshone pupfish — a species thought to have gone extinct in the 1960s — living in a concrete ditch. Now, with a series of improved pools, there are thousands.

“We’ve put a lot of money into trails and wetlands and protection of species,” she said. “I’d hate to see something happen to it.”