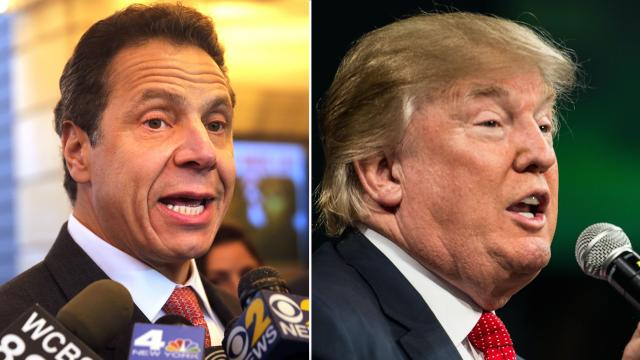 CNN — Andrew Cuomo is expected to concede in a meeting with Donald Trump Thursday that the state will give federal authorities access to the DMV database specifically for those applying for the Trusted Traveler Program but the New York governor said it's a ploy to call the President's bluff.

The decision comes after the administration announced last week that New York state residents can no longer participate in certain Trusted Traveler Programs, including Global Entry, due to provisions in the state's new "Green Light Law" supporting undocumented immigrants.

Calling it "pure politics," Cuomo told local radio host Jay Oliver Wednesday morning: "I will give them the DMV database for Trusted Traveler. These are people who go for an in person federal interview with all sorts of background information."

On another radio program he said: "I'm calling their bluff by saying, you said you want access to the DMV database for TTP? I'll give it to you."

"I don't believe that's what they want," he continued "I believe they just want political noise because they really want to make their argument about immigration."

Cuomo is expected to offer federal access to the DMV database specifically for those applying to the Trusted Traveler Program, on a case-by-case basis, at a meeting with the President Thursday.

The law, which went into effect in December, allows undocumented immigrants to apply for New York driver's licenses while protecting applicants' information from immigration enforcement agencies. The state's attorney general said New York would sue the administration over the decision to suspend the programs.

"DHS claimed they wanted this information to determine qualifications for the TTP, but it is a sham because they just want access to undocumented immigrants' personal information, and as the Governor said, we are never going to give them that," said Dani Lever, Cuomo's communications director.

Since taking office, the President has become an outspoken critic of Cuomo and his own home state of New York following the Manhattan district attorney's ongoing lawsuit in pursuit of his tax returns.

The native New Yorker officially declared himself a Florida resident last year, according to court documents, saying he was leaving the Empire State because he had been "treated very badly" by its politicians.

The change was primarily for tax purposes, a person close to the President told The New York Times. Florida does not collect income tax.

"I cherish New York, and the people of New York, and always will, but unfortunately, despite the fact that I pay millions of dollars in city, state and local taxes each year, I have been treated very badly by the political leaders of both the city and state. Few have been treated worse. I hated having to make this decision, but in the end it will be best for all concerned. As President, I will always be there to help New York and the great people of New York. It will always have a special place in my heart!" Trump tweeted.

"Good riddance. It's not like @realDonaldTrump paid taxes here anyway," the governor tweeted. "He's all yours, Florida."

Trump has also tweeted that Cuomo has "lost control, and lost his mind," and said that the state can "never be great again" under his leadership.

When the two do meet face to face, Trump has set a low bar for working together. On Saturday, he tweeted that Cuomo cancelled a meeting initially planned last weekend.

"Governor Cuomo wanted to see me this weekend. He just canceled. Very hard to work with New York - So stupid. All they do is sue me all the time!" he wrote.

Cuomo said in a statement he didn't cancel any meeting, that his office had reached out to request a meeting and was waiting to hear back.

For his part, Cuomo said Wednesday that he would put his personal feelings aside.

"Look, first of all I do not have the luxury of personal feelings Jay. I represent the people of the State of New York. You have to work with Democrats. You have to work with Republicans. And that is my job. I am not going to put my personal feelings first. I would not do that. It would be disrespectful to the people of this State. I will work with anyone who will help New York -- period," he said.

CNN's Caroline Kelly and Geneva Sands contributed to this report.