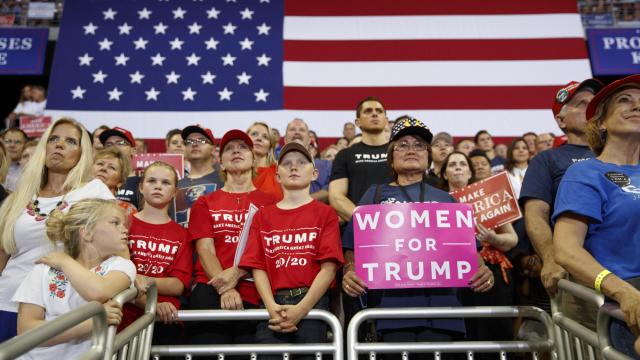 LEESBURG, Va. — Gina Anders knows the feeling well by now. President Donald Trump says or does something that triggers a spasm of outrage. She doesn’t necessarily agree with how he handled the situation. She gets why people are upset.

But Anders, 46, a Republican from suburban Loudoun County, Virginia, with a law degree, a business career, and not a stitch of “Make America Great Again” gear in her wardrobe, is moved to defend him anyway.

“All nuance and all complexity — and these are complex issues — are completely lost,” she said, describing “overblown” reactions from the president’s critics, some of whom equated the Trump administration’s policy of separating migrant children and parents to history’s greatest atrocities.

“It makes me angry at them, which causes me to want to defend him to them more,” Anders said.

In interviews across the country over the past few days, dozens of Trump voters, as well as pollsters and strategists, described something like a bonding experience with the president that happens each time Republicans have to answer a now-familiar question: “How can you possibly still support this man?” Their resilience suggests a level of unity among Republicans that could help mitigate Trump’s low overall approval ratings and aid his party’s chances of keeping control of the House of Representatives in November.

“He’s not a perfect guy; he does some stupid stuff,” said Tony Schrantz, 50, of Lino Lakes, Minnesota, the owner of a water systems leak detection business. “But when they’re hounding him all the time it just gets old. Give the guy a little.”

Republican voters repeatedly described an instinctive, protective response to the president, and their support has grown in recent months: Trump’s approval rating among Republicans is now about 90 percent. And while polling has yet to capture the effect of the last week’s immigration controversy, the only modern Republican president more popular with his party than Trump at this point in his first term, according to Gallup, was George W. Bush after the country united in the wake of the Sept. 11 attacks.

Trump has also retained support across a range of demographics other than the working-class voters who are most identified with him. This includes portions of the wealthy college-educated people in swing counties, like Virginia’s Loudoun, in the country’s most politically competitive states.

Many of these voters say their lives and the country are improving under his presidency, and the endless stream of tough cable news coverage and bad headlines about Trump only galvanizes them further — even though some displayed discomfort on their faces when asked about the child separation policy, and expressed misgivings about the president’s character.

“It bothers me that he doesn’t tell the truth, but I guess I kind of expect that, and I expect that from the media, too — not to always tell the truth or to slant it one way,” said Julie Knight, 63, a retired personal injury case manager from Algona, Washington.

The increasingly tribalized politics on the left and right have helped insulate Trump from the paroxysms that have jolted his party and eroded long-standing expectations of restraint, humility and honesty in American presidents. This era of tumult has left Democrats energized and determined to win back Congress and act as a check on Trump, and their intensity has been reflected by strong turnouts in the primaries. But still, in just the last year and a half, Trump has bounced back from crises that at the time seemed as if they might be too severe for him to recover politically. He tried to unilaterally bar visitors from several Muslim countries from the United States, angering U.S. allies and provoking clashes with Congress and the courts over the limits of executive power. He praised some “very fine people” at a deadly white supremacist rally in Charlottesville, Virginia, in remarks that shook some members of his Cabinet so deeply that they considered resigning. He defended Roy S. Moore, a Senate candidate in Alabama who was accused of fondling teenage girls, by suggesting that the allegations were old and possibly made-up.

And so as another immigration crisis of his own making smoldered this past week, critics inside and outside Trump’s party predicted another devastating, irremediable low point in his presidency. Yet many Trump voters said they no longer had the patience or interest to listen to what they see as another hysterical outburst by Democrats, Republican “Never Trumpers” and the media.

“It’s kind of like when you experience a sensation over and over and over again,” said Daniel Arnold, 32, a warehouse manager from Leesburg, Virginia, about an hour outside Washington. “A sensation is no longer a sensation. It’s just, ‘Oh, here we are again.'”

For many Republicans, the audio of children sobbing at a migrant detention center barely registered, because these voters don’t pay attention to the left-leaning and mainstream media that have covered the family separation crisis far more than their preferred channel, Fox News.

“I think it’s terrible about the kids getting split up from their parents. But the parents shouldn’t have been here,” said Lynn Dittbenner, 65, of Elk River, Minnesota, who took the day off from relaxing with her family at their lake cabin to hear the president speak at a rally in Duluth on Wednesday.

Others said they saw a ploy by the president’s enemies to obscure news that was more favorable to him, like the internal Justice Department investigation that recently uncovered evidence of FBI agents speaking disparagingly of Trump.

“It’s just incredible what the nation is trying to do to disrupt this president and his agenda,” said Jeff Butts, 58, an unemployed sales manager from Leesburg. “We don’t get to hear about that. We only get to hear about the crying babies on the border.”

Sometimes they seized on made-up or erroneous story lines that were mostly absent from the mainstream media.

“Those cages and those families — that was actually filmed during the Obama administration, not the Trump administration,” said Clayton Smith, 57, a commercial lending underwriter from Cary, Illinois, a Chicago suburb.

Smith was correct about one image. He was referring to a story that was covered widely in the conservative media over the last few weeks about one of President Barack Obama’s former speechwriters who tweeted a picture of immigrant children sleeping in a chain-link pen. “This is happening right now,” the tweet said, despite the fact that the picture was from 2014 when Obama was president. (He later deleted it and acknowledged the error.) As isolated as those examples are, they are validating for people who believe their political beliefs are constantly held under a microscope and vilified.

“I don’t have friends anymore because I’ve switched parties,” said Judy Brana, 66, a retired music and art teacher from St. Cloud, Minnesota, who left home at 10:30 Wednesday morning to make the 2 1/2-hour drive up to Duluth for the president’s rally.

Another factor that seems to be driving up support is a sense that no one is acknowledging Trump’s successes, which they see as manifold, historic and irrefutable.

“Let’s see,” said John Westling, 70, of Princeton, Minnesota, reciting a list of the president’s accomplishments that he said no one in the media wants to talk about. “Economy booming, check. Unemployment down, check. Border security being addressed, check. Possible end to the Korean War that started when I was 3 years old, 68 years ago, check.”

“I suspect that if Trump walked across Lake Mille Lacs,” Westling added, “the media would announce, ‘Trump can’t swim!'”

As measured by the Gallup daily presidential approval tracking poll, Trump has averaged 87 percent job approval from fellow Republicans in his second year in office, up from 83 percent in his first year. And during the past two weeks, his approval rating hit 90 percent with Republicans.

Yet some say their patience with Trump’s divisive style is not limitless. Gary Winthorpe, a 17-year-old high school student who was on his way to see the president speak in Minnesota on Wednesday, said he hopes the first vote he casts for president in 2020 is for Trump. But he acknowledged being wary at times, aware of protests against the president.

“I’m not blindly for Donald Trump,” he said. “I have a fair bit of skepticism toward him. But I feel like he is trying his best.”

Trump fared much worse than prior Republican candidates among well-educated and affluent white voters, and became the first Republican to win the presidency while losing white college graduates. But he nonetheless won considerable support among college-educated and affluent voters. He retains much of that support today. According to a Pew Research survey this month, approximately 31 percent of Trump approvers are white men without a college degree, and 66 percent are either college graduates, women or nonwhite.

There is some evidence that Trump’s base of support may have shrunk slightly, though. In recent polls from Gallup and Morning Consult, the numbers of people who identified as Republicans were about 2 percentage points smaller than they were in early 2017.

Among Democrats, Trump’s initial approval has been historically low, failing to reach 15 percent since he took office. Presidents have traditionally come in with at least a moderate amount of support from the opposing party. Just as Trump has changed the makeup of the Republican coalition, he also appears to have helped change the views of the people who support him.

Republicans appear to have developed more forgiving views on morality and public service in recent years, for example. In 2011, 1 in 3 Republicans thought an elected official who commits immoral acts in private life could act ethically in public life, according to a Public Religion Research Institute/Brookings survey. By 2016, 7 of 10 did. The trend was especially pronounced among white evangelicals, who strongly supported Trump and went from being the least likely to the most likely to agree that a candidate’s personal immorality had nothing to do with public service.

The percentage of Republicans who say they have a favorable view of Vladimir Putin, the Russian president for whom Trump has repeatedly expressed fondness, has doubled from 2015 to 2017 to 24 percent, according to Gallup. Among Democrats, Putin’s popularity has plummeted.

Even if Trump wasn’t at the center of the national conversation, Anders, the Loudoun County business executive, said she thinks that the country would still be polarized. But as long as he is, she said, people on the right and the left will probably continue to dig in based on what Trump does and how his opponents respond.

“It all coalesces around Trump,” she said. “It’s either, ‘Trump wants to put people in cages, in concentration camps.’ Or, on the other side, ‘Oh the left just wants everybody to come into the country illegally so they can get voters.'”

She concluded: “We can’t have a conversation.”