Now Women Are Supposed to Worry About Their Jawlines Too? 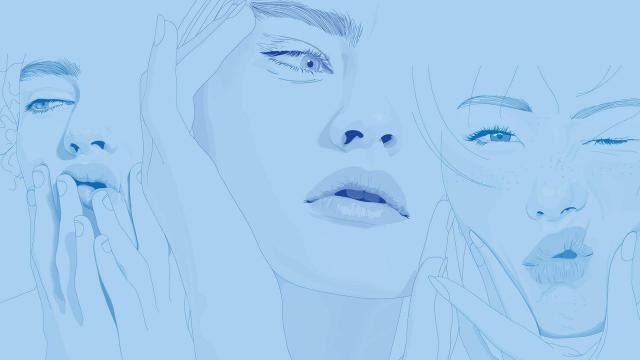 It was during a WhatsApp call that Debra Reynolds, a marketing executive in Manhattan, started noticing her softening jawline. “It was all I could see in the mirror,” Reynolds said. “In meetings I was aware of constantly pushing my chin out like a duck.” It was then that Reynolds, 47, turned to Matthew White, a facial plastic surgeon, to remedy the problem.

The surgery, which White calls the Golden Angle Lift, creates the tighter, more defined jawline and lower face that to many signals youth and beauty. “The day after surgery, when Dr. White removed the bandages, my jawline looked like Angelina freaking Jolie,” said Reynolds of her surgery, which she said cost about $18,000.

Credit the rise of videoconferencing and social media for the new focus among women on their jawlines, long a key structural feature for men (as a sign of masculinity) and models (who rely on bone structure to be photogenic).

According to data collected by the American Academy of Facial Plastic and Reconstructive Surgery, in 2017, 55 percent of facial plastic surgeons noted having seen patients expressing a desire to look better in selfies. Selfies also can distort people’s perceptions of their appearance.

“People are seeing more pictures of themselves and becoming more sensitive to how they look,” said White, clinical assistant professor of otolaryngology — head and neck surgery — at NYU Langone Medical Center. “That trend has driven more patients to our office because they are concerned about their jawlines.”

White said that his focus is on supporting the three key ligaments that define a youthful jawline and redraping the connective tissue — in some cases repositioning fat pads — rather than simply cutting and pulling back the skin. The result is a more natural yet sculpted look.

“We are learning that the bone structure of the face is more important than we ever knew before,” White said, citing a 2017 study of facial skeletal aging published in JAMA Facial Plastic Surgery.

Dendy Engelman, a dermatologist and assistant clinical professor at Albert Einstein Hospital, said that she, too, has seen a rise in the number of in patients looking for a more sculpted jawline.

“It’s a little-known fact that in addition to losing collagen and elastin as we age, we also resorb bone, so the whole scaffolding of the face is actually shrinking overtime,” Engelman said. “To that end, we see significant jowling and sagging in the lower face as a result.”

While in years past, only a face-lift could do what was necessary to really reshape the jawline, doctors and aestheticians now have an arsenal of treatments, both surgical and noninvasive, at their fingertips.

AirSculpt, a procedure invented by Aaron Rollins, a plastic surgeon in Los Angeles, is a more targeted form of liposuction. Unlike liposuction, which removes fat by scraping and suctioning it out, AirSculpt uses a smaller and more precise cannula that works in a superfast corkscrewlike motion to cherry-pick targeted cells.

“I can pluck each individual fat cell out — its almost like using Photoshop on the face,” said Rollins, who founded a chain of surgical clinics called Elite Body Sculpture. The procedure costs about $5,000 for the jawline area.

Adam Kolker, a plastic surgeon (and associate clinical professor of surgery at the Icahn School of Medicine at Mount Sinai), says he sees good results from FaceTite, a procedure that delivers radio frequency energy beneath the skin by way of a cannula inserted through small access points.

“It’s a paradigm shift in our ability to contour the jawline because you are literally going to the tissue planes that need to be treated, creating a controlled thermal injury,” Kolker said.

The procedure, which costs $7,500 to $10,000 for the jawline, activates the body’s natural healing response, building more collagen to gradually tighten the treated area. This fall, Kolker will start offering Embrace RF — that is, FaceTite combined with Morpheus8, a more advanced version of an external radio frequency micro-needling treatment that works on the surface layer of the skin to enhance results.

For the surgically disinclined, Jeannel Astarita, an aesthetician andfounder of Just Ageless, in the Howard Hotel in SoHo, often recommends Ultherapy, a noninvasive therapy that uses ultrasound delivered through the skin to heat the deep dermis and is said to trigger skin lifting and tightening.

Lauren Abramowitz, a physician assistant and founder of Park Avenue Skin Solutions in TriBeCa, uses a hybrid of Kybella (the fat-melting injection), Botox and soft-tissue fillers to transform a weak jawline into a stronger one. (The American Society for Dermatologic Surgery reports that treatments like Kybella, most commonly used to reduce fat below the chin, rose 23 percent in 2017.)

Those who want something less invasive have options like a facial by Mila Moursi, an aesthetician in Beverly Hills, California, who has been credited with keeping Charlize Theron, Jennifer Aniston and Jane Fonda camera-ready. At Moursi’s spa and at Barneys New York, clients can experience her Signature Firming Treatment ($250), which involves manual massage and microcurrents to enhance the jawline.

For a temporary fix, there’s always makeup. Elyse Reneau, the global pro artist for Too Faced Cosmetics, demonstrates in a YouTube video how to use Too Faced’s new Super Coverage 4-in-1 concealer ($29) to create the illusion of a sharper jawline.

Her advice: “Start behind the ear, draw a line right on your jawline in a shade that’s two to three shades deeper than your natural skin tone, then blend with a wet beauty sponge down the sides of the neck.”

Amid all of the options, Gracia Tapia, a patient of Rollins, is glad she invested $5,000 in her jawline procedure. The change in her appearance prompted Tapia, 39, a probation corrections officer in Riverside, California, to start exercising regularly and to be more mindful of what she eats; she has lost 70 pounds.

“I always used to ask people to ask me before they posted a picture, and now it doesn’t matter,” she said. “I love how I look.”