'Nothing scarier than childhood cancers.' Raleigh teenager raising money through haunted drive-thru after own battle

But, her teenage son Edward is.

"I just love Halloween, horror and stuff like that. My mom hates it. I have no idea where I got it from," he said.

"He's always asked for a haunted house - for years. When he was little, it was just too much of an undertaking," added Sarah Thompson.

Then in 2012, Edward was diagnosed with Hodgkin's Lymphoma, a blood cancer. While undergoing treatment for the cancer, Edward's parents looked for a way to lift his spirits.

"Mom and dad saw that I was kind of down in the dumps and they said, 'You know, this year, we're going to do a haunted house,’" recalled Edward.

Halloween was supposed to coincide with the end of Edward's treatment, according to Sarah Thompson. 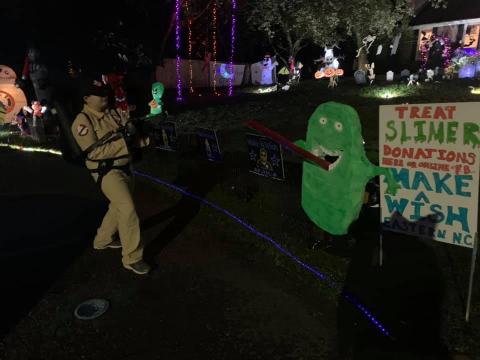 "We said, 'Well you'll be done with chemo [and] we'll do the haunted house. You'll be feeling better,’" she said. "This will be the year. We'll try it out and see what happens. [But] he was actually relapsing in that first time."

Edward had been off chemotherapy for five weeks when the family found out he had cancer again.

"We said, 'If we do the haunted house, you know, why don't we do it for Make-A-Wish since your wish is coming up and that'll help them.' So we raised $700 the second year and then we went on our wish trip," said Sarah Thompson.

"He got rid of cancer eventually. It took a while, but we're in remission now," she added.

During Edward's Make-A-Wish trip, the Thompson family stayed at the Give Kids the World Village in Florida.

"It's just such a wonderful place. They do parties every week, so they have Christmas every week [and] they have Halloween every week," said Sarah Thompson.

Now, Edward is combining his love for horror with giving back. The family uses money raised from the haunted house to donate to Make-A-Wish and Give Kids the World.

Edward spends all year preparing for his haunted house. This year, he even got a summer job to help pay for more decorations.

"Over the years, I just asked for Halloween decorations -- for Christmas [and] my birthday. I get the most ugliest stuff for Christmas," he joked.

For the past two Halloweens, the coronavirus pandemic caused the family to switch the haunted house setup to a yard drive-through.

"I wasn't so sure how it was going to go. I was kind of scared. It took a lot for me to get into it, but once I started seeing things going out in the yard, I got into it," said Edward. "It still looks good, [just] not as interactive."

Edward is even paying homage to the infamous zebra cobra that was on the loose in Raleigh for several days earlier this year.

"We made a giant [zebra cobra] and that's what people donate their money down ... if they're too scared of the snake, they can do the slimer," said Edward. 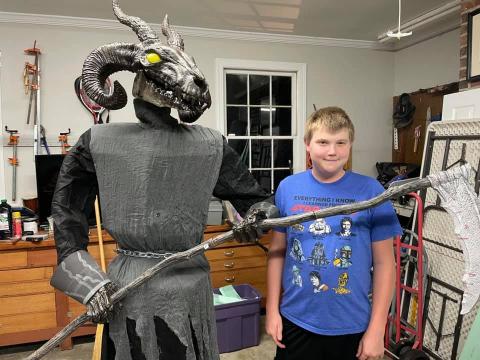 While Sarah Thompson still isn't a big fan of Halloween, she said she's already faced much scarier moments in her life.

"We say that, that's actually the scariest thing out there because, you know, I used to not like Halloween but then I realized we've already been through like the worst thing ever. There's nothing scarier than childhood cancers. I can handle this much better now," said Sarah Thompson.

Edward's Haunted Battle Yard will run through Oct. 31 from 7-10 p.m. at 9401 S. Mere Ct. Those who would prefer to donate online to Give Kids the World can click here.