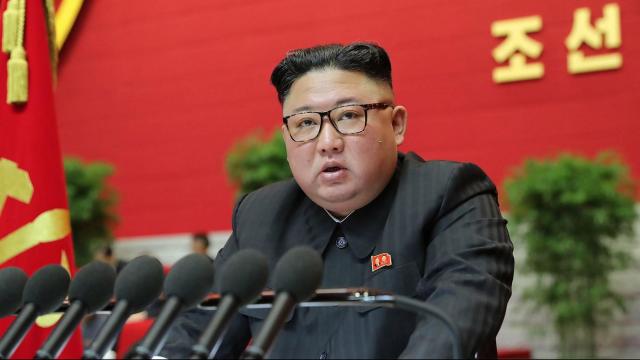 "Our external political activities must focus on our arch-enemy and the fundamental obstacle to our revolutionary development, the United States," Kim told the 8th Congress of the Workers' Party of Korea, the state run Korean Central News Agency reported.

"The efforts will focus on overpowering and bringing them to their knees," he added.

Kim was once courted by Trump, who mused in 2018 that the pair "fell in love" after exchanging letters.

Trump's comments came after the pair held a historic summit in Singapore to discuss denuclearizing the Korean peninsula in the June of that year. A second summit in Hanoi, Vietnam ended early with the two men unable to reach an agreement.

Any warmth between the leaders appeared to have diminished Saturday as Kim also disclosed a list of high-tech weapons systems under development, although he insisted his country was a "responsible nuclear state," and would not abuse its weapons unless first threatened.

In an apparent attempt to also apply pressure on the incoming administration of President-elect Joe Biden, Kim said: "Whoever takes office in the U.S., its basic nature and hostile policy will never change."

Relations between North Korea and the U.S. would depend on "the U.S. withdrawing its hostile policy," he added.

Biden, who will take office on Jan. 20, has previously called Kim a "thug" and criticized his summits with President Trump. He is unlikely to hold direct meetings with Kim unless the North Korean leader takes significant denuclearization steps first.

Among the sophisticated weapons systems listed as being under development by Kim, were multi-warhead missiles, underwater-launched nuclear missiles and spy satellites which will bolster his country's ability to attack the U.S. mainland.

It's unclear if the secretive communist state is capable of developing such systems. Information about one of the world’s most cloistered countries is scarce, and estimates on the exact status of its nuclear and missile programs vary widely.

In 2018, the South Korean government said North Korea was estimated to have up to 60 nuclear weapons.

The congress is the party's top decision-making body, and comes amid a series of challenges for the country, including a fragile economy, the coronavirus pandemic and U.S.-led sanctions.

Copyright 2021 NBC News. All rights reserved. This material may not be published, broadcast, rewritten or redistributed.