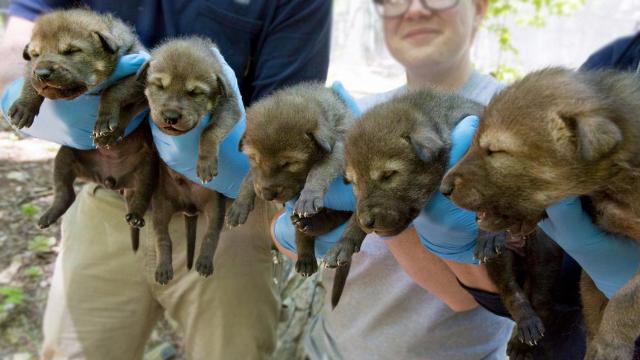 Zoo officials said three females and two males were born on April 15, as severe storms, including a tornado that caused heavy damage in Greensboro, swept across North Carolina.

Since they were born during the severe storms, four of the pups were named Thor, Thunder, Hurricane and Typhoon. The fifth pup was named Oakley, for the Oklahoma-shaped marking on her chest, zoo officials said.

The pups were born to Ayita and Finnick, who have bred before, and their birth brings the total number of red wolves at the zoo to 24.

The pups are being kept in a non-public area at the zoo and will have minimal contact with staff and keepers so they can be raised by their mother with a limited amount of stress in their natural habitat.

According to a recent report from the U.S. Fish and Wildlife Service, the only wild population of endangered red wolves is unsustainable and could be wiped out within a decade after dwindling to a few dozen. The review of the species' status estimates that only about 40 wolves remain in the wild in eastern North Carolina, down from a peak of about 120 a decade ago.

Another 230 wolves live in zoos and wildlife facilities, including the Museum of Life and Science, which welcomed its own red wolf pups last month.

Three red wolf pups were born at the Museum of Life and Science on April 21, but one was found dead shortly after. Losses are not unusual in red wolf litters, according to museum officials.