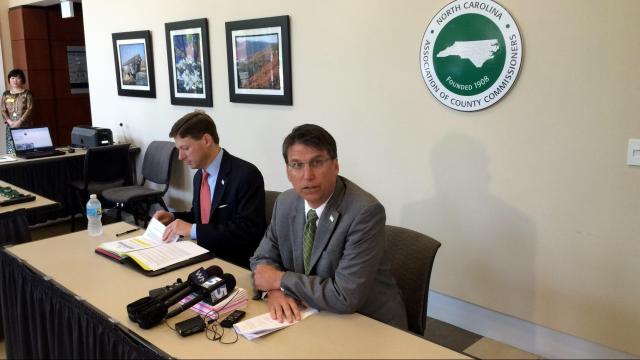 The consensus revenue report is especially good news given that, as recently as March, revenue projections showed the state would end the year with a slight deficit. The extra cushion will give lawmakers padding to put more money into salaries and tax breaks as they begin to craft the state budget this month.

"Like anything else, both good news and bad news, I don't think it's right that politicians try to claim credit for all of it. A lot of it is the fact the economy is improving," House Speaker Tim Moore said. "But I do think the changes we made have helped. The tax reform, the focusing on economic development have played a part in it."

Moore, McCrory and others were careful not to, in their words, "spike the ball," even through they were obviously pleased that revenue projections had swung around. While no set of numbers will silence critics, legislative leaders say the surplus shows a 2013 tax reform package is having the desired impact.

Democratic leaders argued Wednesday that the $400 million boon to the state government came out of the paychecks of average families, while higher-paid workers and corporations saw their taxes go down.

"What about the rest of North Carolina? What about working families? What do they get out of this?" Rep. Larry Hall, D-Durham, asked.

But Republicans insisted everyone was benefiting.

"Chicken Littles on the left loudly cried North Carolina would lose so much tax revenue that students wouldn’t have teachers, roads wouldn’t be built and our universities might have to close," Senate President Pro Tem Phil Berger said. "But far from starving state government, tax cuts and tax reform have spurred economic growth and job creation."

With a surplus in hand, politicians set to work laying out what they would like to do with the extra cushion. Legislative leaders must build a new, roughly $21.5 billion state budget by June 30, the end of the fiscal year.

In addition to putting more money away for a rainy day, McCrory told the North Carolina Association of County Commissioners that he would like to put more money into targeted raises for state employees. He said he also would like to reinstate a tax credit for seniors that allowed them to deduct medical expenses from their taxes and reinstate tax credits that help cities reuse historic factory and warehouse buildings.

Moore, R-Cleveland, mentioned those priorities as well, singling out the same two tax credits as well as a promise to raise starting state-paid teacher salaries to $35,000.

"We're going to keep our promise to new teachers and do something for other state employees, not just teachers. State government is only as effective as its employees," Moore said.

Some of the money in the surplus is already spoken for. State law would take about a quarter of the surplus for reserves and the fund used to repair state buildings.

"It's in the context of very strong revenue growth," Roberts said.

But the coming drop in corporate taxes was a target for Democratic critics, who said the state could be setting itself up to cut revenue without really understanding why there was a surplus this year. Sen. Dan Blue, D-Wake, argued that stock sales or other sorts of profit-taking could have given income tax collections a momentary jolt that would fade away by next year.

Blue also said taxpayers felt the pinch of the new tax rates this year in the form of lower refunds.

"On April 15, people realized they were paying more than taxes than they were before," Blue said.

That's not entirely true. When the tax changes were put into effect, new withholding guidelines meant that people would pay less with each paycheck. However, that meant smaller refunds or, for those who did not adjust how much was withheld from their paycheck, a tax owed to the state. Others did see their taxes go up, particularly people who relied on specific tax breaks that were eliminated, such as the medical tax deduction.

"That was always going to be a part of tax reform," Roberts said of how the refunds panned out this year.