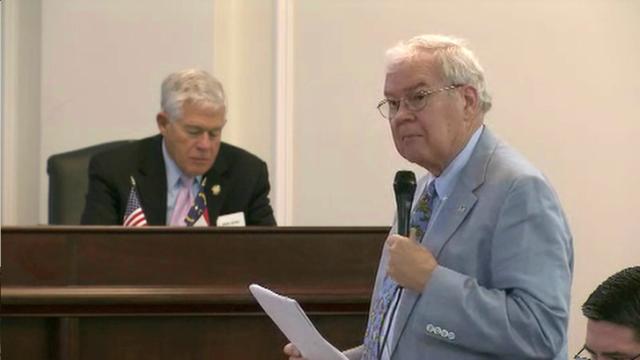 RALEIGH, N.C. — Longtime state Sen. Louis Pate, R-Wayne, resigned Monday, a few months after acknowledging health problems and a week since getting sworn in for another two-year term in the North Carolina legislature.

The 82-year-old Vietnam War veteran and former Mount Olive mayor had started his ninth term in the legislature, going back to 1995. He previously served four terms in the House.

Pate said in October that an unspecified health issue had caused him to scale back campaigning for re-election in the 7th Senate District. Pate said in his resignation letter to Gov. Roy Cooper that he had hoped to make a full recovery by now. He took the oath of office privately one day before the General Assembly convened its new session Jan. 9.

"The reality is my recovery is still ongoing and will preclude me from serving my constituents to my fullest ability and to the high standard I expect to deliver for my constituents," Pate wrote.

Now, Republican leaders in Wayne and Lenoir counties will choose someone to serve out his two-year term. Cooper is required by state law to appoint the local GOP's choice.

While in the Senate, he was heavily involved in health care issues such as Medicaid and most recently served as deputy president pro tempore. Colleagues praised him Monday for his collegiality and civility.

"Sen. Pate’s leadership and personal touch made this body more effective, and for that every senator should be grateful,” Senate President Pro Tem Phil Berger said in a statement.

"He worked tirelessly for the betterment of all citizens that he represented. I hate to see him leave public service but hope he enjoys his well-earned retirement," North Carolina Republican Party Chairman Robin Hayes said in a statement.

"Sen. Pate was an expert on Chinese food. He’d always take some folks over to Red Dragon, and then he loved to go to Baskin-Robbins afterwards for some ice cream," former Sen. Tommy Tucker, R-Union, recalled in a statement. "I don’t know how in the world we did it. Maybe that’s why I weighed so much when I was up there.