Raleigh, N.C. — Raleigh residents got two chances Saturday to see the Most Rev. Michael Curry make international news. Curry, who served 16 years as bishop of the Episcopal Diocese of North Carolina before his promotion to presiding bishop of the Episcopal Church, was hand-picked by the bride and groom – Meghan Markle and Prince Harry – to deliver the homily at their wedding.

When he got the call, Curry said, he first thought it was an April Fool's joke. Then he realized the opportunity he'd have to reach beyond the typical Episcopal congregation.

"I really prayed over that homily, as I do over any homily, but I prayed I might say something about Jesus Christ for everyone in that church or watching on TV or on a computer screen or reading about this later," Curry said Monday, after his return to the United States.

His homily quoted from the Song of Solomon, from Martin Luther King Jr. and from a an African-American spiritual song.

"There's power in love," he repeated.

Curry said he recognized and wanted to honor a deep and abiding love between bride and groom.

"Watching the two of them up close, these are really two people in love," he said. "You could actually see it."

While the invitation may not have been a joke, Curry's passionate delivery, and its contrast with Anglican tradition, did earn him a spoof on Saturday Night Live.

"In my entire life, in my wildest imagination, I never believed I would be spoofed on Saturday Night Live. And I loved it! It was a stitch," Curry said. 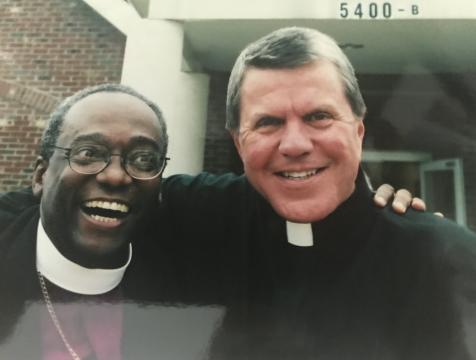 Curry, who was born in Chicago, now resides in New York. He began his ministry as deacon-in-charge at St. Stephen's in Winston-Salem in 1978 and was rector from 1979 to 1982, according to the church's website. He served in Ohio and Maryland before his time in Raleigh.

While in Raleigh, he ordained WRAL's David Crabtree.

Curry is the first African-American to have served as presiding bishop of the Episcopal Church, an offshoot of the Church of England in the United States. It is part of the worldwide Anglican Communion.