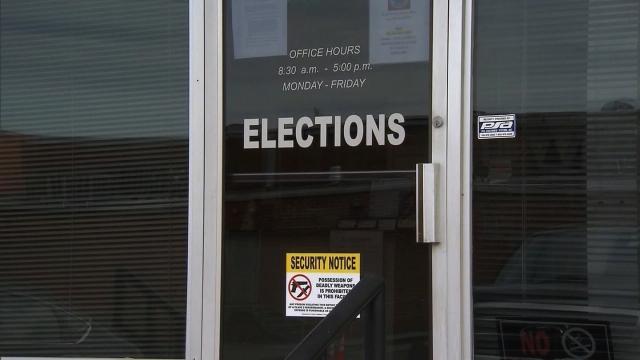 (CNN) — North Carolina Republicans said Tuesday that a new election would be necessary in the state's 9th Congressional District if investigators can verify a local newspaper report that early voting results in Bladen County were leaked before Election Day.

"We are pretty certain that happened," state GOP executive director Dallas Woodhouse told reporters, "and if it is confirmed, a new election is appropriate." His comments followed those of state party chairman Robin Hayes, who responded to The Charlotte Observer report earlier in the day, saying the alleged actions of elections officials there amounted to a "fundamental violation" of the integrity of the vote.

The statements marked the most significant indication to date that North Carolina Republicans would be open to a re-run of the midterm election.

Republican Mark Harris appeared to emerge as the narrow winner over Democrat Dan McCready on Election Day but subsequent revelations of fraud surrounding absentee ballots in two counties have Democrats and Republicans, who also might have seen their primary marred by similar irregularities, openly discussing the prospect of launching a second vote.

The decision ultimately rests with a bipartisan state board, which recently voted 9-0 not to certify the initial result. The board is expected to hold an evidentiary heading in the coming days.

Earlier Tuesday, North Carolina Democratic Party Chairman Wayne Goodwin hammered Harris for keeping mostly mum on his relationship with Leslie McCrae Dowless, a convicted felon who was hired by a consulting firm on the Harris campaign payroll, as new evidence of irregularities mounted and state Republicans suggested a new election could be in order.

Casting the evidence of fraud as part of the North Carolina Republican Party's "systemic and systematic efforts to rig this election," Goodwin accused Harris of "hiding behind his lawyers and refusing to answer questions from voters and the media."

"Mark Harris must answer to the voters about what he knew and when he knew it," Goodwin said.

In a statement on Friday, Harris said he was "absolutely unaware of any wrongdoing," but did not immediately respond to a request for comment on Tuesday.

"If this investigation finds proof of illegal activity on either side to such a level that it could have changed the outcome of the election," Harris said last week, "then I would wholeheartedly support a new election to ensure all voters have confidence in the results."

Dowless led a loosely connected network involved in the potentially criminal handling of absentee ballots. North Carolina's State Board of Elections on Friday named Dowless as "a person of interest in connection with an alleged absentee ballot operation in the congressional district." Dowless has not responded to multiple calls for comment. He previously denied wrongdoing to The Charlotte Observer.

New evidence also emerged on Tuesday that Dowless might have collected and potentially withheld hundreds of absentee ballots. In an affidavit obtained by CNN, a North Carolina man claims Dowless told him before the election that he was in possession of "over 800 ballots." The voter also questions whether Dowless intended to deliver them to election officials.

Kenneth Simmons said in the affidavit that he asked Dowless why he hadn't turned the ballots in, and he said Dowless replied, "You don't do that until the last day because the opposition would know how many votes they had to make up."

Widely known around Bladenboro, Dowless was nowhere to be found when CNN sought him out on Tuesday. A man who identified himself as Dowless' grandson Tanner said he left a day earlier on vacation.

Woodhouse has repeatedly expressed an openness to a new election, though never as clearly as on Tuesday, but still has not gone as far as Democrats, who are publicly calling for one and openly discussing preparations, like McCready did a day earlier.

"We're gearing up right now in case we do have a special election," McCready said during a Monday appearance on MSNBC. "We're gearing up to be in this fight. Ultimately this is the decision of the board of elections."

National Democrats are already on the ground in Raleigh working alongside the state party, providing legal and logistical assistance, and helping to put back together McCready's campaign operation, which largely dissolved after an apparent loss in November. Prominent figures like Sens. Elizabeth Warren and Kamala Harris have also sent out fundraising appeals for McCready.

"The DCCC is committed to ensuring that our democracy is protected and voters in North Carolina have their voices heard," the Democratic House campaign arm's new chair, Illinois Rep. Cheri Bustos, said in a statement to CNN. "That's why we have committed staff and legal resources on the ground in order to get answers on this clear and obvious example of election fraud, connected to Mark Harris' campaign."

Republicans have mostly been more circumspect than Democrats in the face of new elections. But like Harris, they seem to view it as likely and have begun to jockey for political position as the scandal simmers.

Pointing to the recent resignation of Jens Lutz, a Democratic vice-chair of the Bladen County Board of Elections, who started a company with Dowless in 2014 called Politico Management Services LLC, North Carolina Republican Party Chairman Robin Hayes called for the state to intervene and oversee a potential re-vote.

"Should this new election be warranted, the professionals at the State Board of Elections must assume control of the county board of elections operations in Bladen County, which has shown itself incapable of managing fair elections," Hayes said in a statement. Calls and texts from CNN to Lutz, who has a history with both parties, were not returned.

Last week, McCready withdrew his concession to Harris and said in a tweet, "I didn't serve overseas in the Marines to come home to NC and watch a criminal, bankrolled by my opponent, take away people's very right to vote."

Like the state party, he has also called on Harris "to end his silence and tell us exactly what he knew, and when."

The numbers follow a trend that traces back nearly a decade. According to campaign finance records, Dowless has been paid more than $23,000 by six campaigns over the last eight years -- and in most of those races, his candidates received a disproportionately large number of absentee votes in his Bladen County.

More than $34,000 of that debt centered on a "reimbursement payment for Bladen absentee" work and other election efforts, according to a post-election report Harris' campaign filed late Thursday with the Federal Election Commission. Red Dome had hired Dowless to perform get-out-the-vote work for Harris' campaign.

Dowless was also paid $940 this year by the Bladen County GOP for what they described as get-out-the-vote efforts.