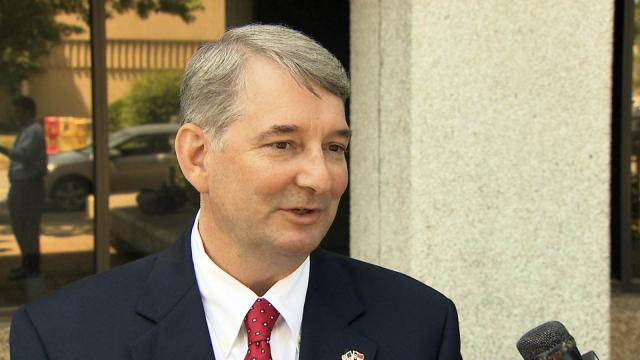 RALEIGH, N.C. — Rhetorical skirmishes continued Tuesday in North Carolina over a law limiting protections for LGBT people, as Democrats criticized a Republican's plea to "keep our state straight" a day after dozens were arrested and dueling demonstrations were held for and against the law.

Police arrested 54 protesters who came to voice opposition to the law late Monday as legislators returned to start their session.

Earlier Monday, at a demonstration by thousands who support the law, the state's Republican nominee for attorney general exhorted the crowd to "keep our state straight."

State Sen. Buck Newton, R-Wilson, urged the crowd to "tell your friends and family who had to work today what this is all about and how hard we must fight to keep our state straight."

The North Carolina Democratic Party issued a statement Tuesday calling the comments hateful and discriminatory toward lesbian, gay, bisexual and transgender people. They called for Newton, who shepherded the legislation through his chamber, to apologize and for Republican Gov. Pat McCrory to denounce Newton's remarks.

Dozens intent on disrupting lawmakers created a raucous atmosphere at the state legislative building following a Monday afternoon rally that drew hundreds of the law's opponents.

Ken Jones of Swannanoa was among three-dozen demonstrators who stayed to make noise long after the chambers gaveled out. He said he was encouraged by the fact that dozens were willing to risk arrest.

"It's a reason for hope. There's so many of us here," said Jones, who was later arrested when officers sought to close the building for the night. "I'm pretty passionate about it."

Three waves of people, several dozen at a time, held sit-ins outside the offices of legislative leaders.

A few minutes later, law enforcement officers started leading out the protesters who had entered Moore's office, one by one, in plastic handcuffs. One man had to be carried out.

Most were led out quietly, but one woman chanted: "Forward together, not one step back!"

Each time one was led out, fellow protesters chanted standing nearby shouted: "Thank you! We love you!"

Eighteen of those arrested were led from Moore's office, while the rest were arrested a couple of hours later by officers who were closing the building for the night.

Acting General Assembly Police Chief Martin Brock said all were charged with second-degree trespassing, and cited for violating building rules or the fire code. One was also charged with resisting arrest.

Detention records show the protesters were released later that night or early Tuesday morning, and they have June court dates.

Forty-nine of those arrested are from North Carolina, including 32 from the Triangle, according to arrest records. Of the remaining five, three are from Washington, D.C., and one each is from New York and Chicago.

Other pockets of protest broke out Monday night elsewhere in the Legislative Building. As the short House meeting ended, demonstrators in the gallery yelled their displeasure. Several dozen protesters shouted, danced and waved their hands inside the front doors of the Legislative Building for at least a half hour before leaving.

"We won't do HB 2," the protesters chanted, referring to House Bill 2 by its initials. "North Carolina sticks together."

Earlier in the day, thousands of Christian conservatives and other supporters of the law gathered on a grassy mall behind the Legislative Building on the legislature's opening day to praise the mostly Republican legislators and the governor for passing the restrictions last month in a special session.

North Carolina House Democrats filed legislation Monday to repeal the law, though a lack of Republican sponsors made its chances appear slim.

"I don't know that it'll change anybody's mind. I certainly would prefer that we not have this sort of protest," he said. "But you know, people have a right to express their opinion if they're upset about something we've done or disagree with something we've done."