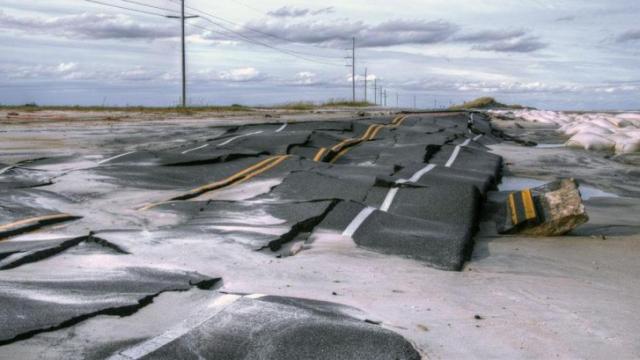 Raleigh, N.C. — The storm system that pounded the Northeast on Wednesday also brought more flooding to the Outer Banks, which is still trying to recover from Hurricane Sandy, officials said.

In Kitty Hawk, the nor’easter pushed sand and water onto N.C. Highway 12, and strong waves carried away most of the sand that state Department of Transportation crews spent days piling up along the beach road to rebuild a dune destroyed by Sandy.

Significant overwash also occurred at the south end of Pea Island at Mirlo Beach, and DOT officials said they expect more problems from the storm at high tide late Wednesday and early Thursday.

Crews will begin assessing damage on Thursday and how it could affect efforts to repair Sandy's impacts.

Sandy dumped 3 to 4 feet of sand on N.C. 12 on Hatteras Island on Oct. 27-29, and the pavement buckled in several places. DOT crews had cleared about 75 percent of the sand from the highway as of Tuesday, moving much of it back toward the ocean so dunes can be reconstructed on the island.

The DOT has awarded an $893,297 contract to RPC Contracting to reconstruct pavement, repair sandbags and construct the dune in Kitty Hawk, as well as repairing pavement on N.C. 12 approaching the temporary bridge at Pea Island.

Carolina Bridge Co. began work Monday on a $186,293 contract to repair the tension cables on the bridge deck of the Bonner Bridge, which connects Hatteras Island to the mainland.

DOT is working to provide access from south of Bonner Bridge to Rodanthe so the agency can open one lane of the bridge for four-wheel-drive vehicles to get to Rodanthe and communities to the south via N.C. 12.

Barnhill Contracting Co. is mobilizing crews and equipment in Rodanthe to begin work in the next few days to reconstruct the N.C. 12 roadway and dunes there and rebuild protective sandbags, officials said.

“Overall, our state was very fortunate, but for some residents along the Outer Banks, Hurricane Sandy was devastating, and they need our help," Perdue said in a statement. "We will do everything possible to ensure that those who suffered damages from Sandy will get any possible aid so they can repair their homes and resume their lives."

If the federal government grants Perdue's request for assistance, it clears the way for SBA to provide low-interest loans to homeowners, renters and businesses that suffered damage from the storm.

Perdue also is expected to declare the area a state disaster area, which would allow victims to seek state funds for recovery.