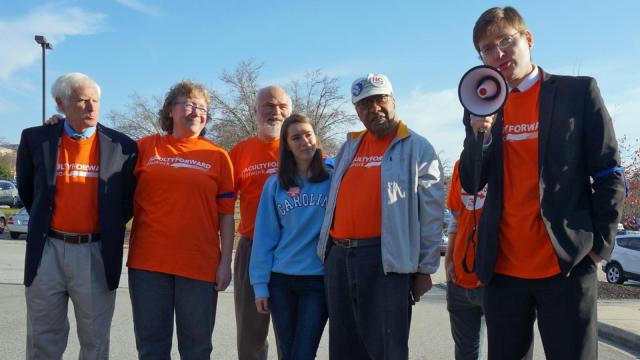 Fayetteville, N.C. — When a protest outside the University of North Carolina Board of Governors meeting wrapped up on Dec. 11, it wasn't a faculty member or student urging people to return in January to continue pushing back against Margaret Spellings' appointment as UNC president.

Instead, it was D'atra Jackson, an organizer with Ignite NC, a Durham-based nonprofit, who reminded the crowd that the next Board of Governors meeting would be at North Carolina A&T State University.

Over the nearly five months since the Board of Governors tapped Spellings, a former education secretary for former President George W. Bush, there have been demonstrations on campuses throughout the UNC system and at the board's meetings. On Friday, March 4, a small group of both faculty and students were on hand to air their grievances as the Board of Governors met on the campus of Fayetteville State University.

"I'm concerned that there is talk of changing the name of our university to UNC at Fayetteville," Chez Rumpf, an assistant professor at the school told WRAL's Gilbert Baez Friday. "I'm worried that that's a blatant disregard for the mission of this university and the students that we currently serve."

Those who have turned out have all cited different reasons for protesting. Some have pointed to worries about under-funding for historically black colleges and universities, rising costs on all UNC campuses and Spellings' connections to the for-profit University of Phoenix and student loan collector Ceannate Corp. Others have cited her work on the federal No Child Left Behind Act, which emphasized standardized testing, or her perceived hostility to gay and lesbian students. Faculty members have also raised questions about "shared governance" and the lack of a voice in choosing Spellings and concerns she will view students more as "customers."

Whatever their concerns, two main groups have helped stitch together protestors across the 17-campus system. Along with Ignite NC, Faculty Forward, an offshoot of the Service Employees International Union, has provided the underpinning for the protests.

"SEIU does support Faculty Forward Network financially and with other resource support, with staffing support," Malini Cadambi Daniel, who coordinates the union's efforts to organize college and university employees around the country, told the Associated Press this week. The union is organizing faculty and staff at colleges across the nation. In February, non-tenure track faculty at Duke University voted to unionize under the Faculty Forward label.

Meanwhile, the Faculty Forward Network, a 501(c)(3) that describes itself as "an activist faculty organization that improves faculty working conditions," has been involved in many of the protests at Board of Governors meetings. Its members are drawn from several different campuses. Four of its members were expelled after disrupting the December Board of Governor's meeting.

Members of Faculty Forward are often distinctive in bright orange shirts with the group's logo when they come to meetings. In Fayetteville, they made their presence known by standing quietly and holding small signs.

While faculty members have certainly played a part in the protests, they are often described as "student led," and Ignite NC has helped organize those student leaders.

Ajamu Billahunt, a political science and history major at North Carolina Central University, says Ignite NC has played a "vital role" in organizing the protests. He is one of three dozen fellows trained by the group to organize their peers on college campuses. The group has also trained poll workers to watch for what it views as voter suppression.

"They have provided us with resources, information and created spaces to engage in these kinds of conversations," he said, crediting the group with building connections between disparate campus communities.

In addition to Ignite NC, Southern Vision provides support for Youth Organizing Institute and the NC Student Power Union. According to its 2014 IRS 990 form, the most recent available online, the group provided $59,480 in support for Ignite NC that year. Blueprint NC, a group that has clashed with elected conservative officials, lists Southern Vision Alliance as a partner.

"They are instrumental in organizing the campuses in the system," said Richard Lindayen, a junior at UNC-Chapel Hill who works with the UNC BOG Democracy Coalition, a student group on the Chapel Hill campus that has been around for 18 months. It initially formed to advocate for better access to Board of Governors meetings and was among those that raised concerns about the Board of Governors plans to close academic centers such as the poverty center once run by Gene Nichols at UNC-Chapel Hill.

Lindayen said one of the group's current concerns is the lack of funding for the HCBU system. It helped to orchestrate the March 1 walkout at Chapel Hill to mark Spellings' first day on the job.

"We will continue to protest until she leaves," Lindayen said.

There are similar organizations on other UNC campuses, he said, and Ignite NC has helped those groups network. For example, at the same time students were walking out at Chapel Hill, they were also leaving classrooms on five other campuses, including UNC-Charlotte, UNC-Wilmington, UNC-Greensboro, Appalachian State University and North Carolina A&T.

A group called The UNControllables, which describes itself as exploring "anarchism and other social experiments that organize against hierarchy and domination," has also participated in protests. According to the student newspaper The Tab, the group has been around since 2012.