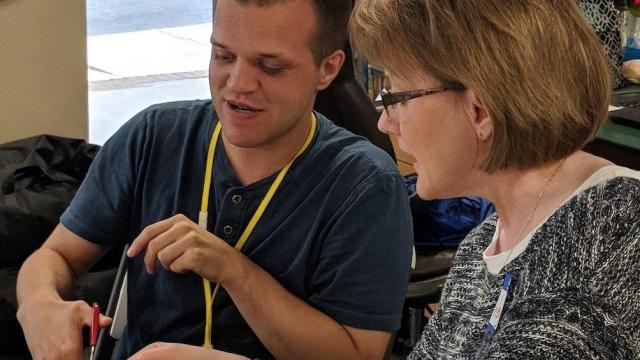 In 2013, Garner was named an All-America City by the National Civic League. This recognition honors municipalities for their citizen initiatives and engagement, cross-sector collaboration, innovation and inclusiveness.

To this day, Garner is working hard to remain worthy of its All-America City title and strives to be a place that is inclusive of all its residents; the prominence of its local nonprofit community levels up to this mission.

In fact, one of the three citizen-led projects that contributed to Garner's "Nobel Prize for civic accomplishments" was Community of Hope Ministries — a local nonprofit organization. Community of Hope ministers to people through various initiatives such as its after-school program, a food pantry and its Jobs for Life training program.

Community of Hope's mission is to "eliminate barriers to success in the home, in the classroom and in the community for at-risk children and families in Southern Wake County."

"It's been 15 years of growth," said Amy White, executive director and founder of Community of Hope. "In every ministry that we offer, we really have just tried to fill a gap that meets the needs of families so that they can be successful — whether it's at home, whether it's in school, whether it's at work or in the community."

A graduate of Garner Magnet High School and Wake Forest University, White is no stranger to service and civic leadership. A former teacher, high school basketball coach and Wake County Board of Education member, White said she saw the education gap of children from economically disadvantaged families firsthand and wanted to help.

"There were lots of sports programs and fun things for kids to do after school, but not a lot of opportunities that met the academic needs of students with low test scores," she said. "I wrote a grant for an after-school program and won it after my second year of trying. About two years into the grant, we began asking what else we could do to serve these families more so that they could be successful in all areas of their lives. We now operate nine different ministries."

Since 2004, Community of Hope has operated its after-school program — a tutoring-based program for first- through fifth-grade students who are below grade level in math and reading, and who come from families that cannot afford tutoring. It also operates the largest food-relief agency in Garner through its food pantry; it distributed more than 176,000 meals to food-insecure families in Southern Wake County last year.

In addition, it offers a scholarship-funded eight-week Christian summer day camp for children in a fun environment, a crisis-assistance program and is a Southern Wake County site for Jobs for Life — a 16-week biblically based job-skill readiness program designed to help underemployed and unemployed people attain skills they need to get back to work.

"We had families in our after-school program that we knew were hungry. So we said, we can help with that — and the numbers grew. So many folks have come together to support what we do both financially and with their time," White said of the ripple effect Community of Hope's services have had throughout Garner. "I cannot express how the Garner community has wrapped its arms around this ministry."

The organization began with a donated, wheelchair-accessible, used van that could transport one person to church, social events, family gatherings and doctor's appointments. In 2009, Able to Serve expanded its services to include continuing education, life-skills training, creative arts, social events and hands-on community service projects, according to the group's website.

"I was looking for a better way to include those with disabilities in the community," said Carlton McDaniel, founder and executive director of Able to Serve. "My father is a pastor and my sister, who is a year older than I am, she has special needs. I grew up in a church environment where my sister was taken care of — she was the pastor's daughter."

Realizing the impact this had on his sister's life, McDaniel wanted to create a place where people with disabilities weren't just accepted, but integrated.

The community-funded nonprofit offers a day program — a five-day-per-week program from 9 a.m. to 3 p.m. that integrates individualized educational instruction, social experiences and community service projects to challenge its participants to "become who they want to be." There are currently 40 adults with intellectual and developmental disabilities ranging in age from 20 to 60 years old who participate in Able to Serve's day program.

Oftentimes after high school, the future for people with intellectual and developmental disabilities is unclear. They may not drive, they may still live at home and they may no longer have the social interactions they once did as friends start pursuing their own paths. McDaniel emphasized how important it is for those with disabilities to be socialized around their peers, not just family members, and to have a purpose outside of the home—just like everyone else. He said it's been wonderful over the years to watch people emerge and grow through Able to Serve.

Maria, the mother of a son with developmental disabilities named Alex, calls Able to Serve their "happy place."

"Alex was born with a rare syndrome that has impacted him physically and intellectually. Early on, we realized Alex would not catch up developmentally to his peers. When Alex came to the end of his high school career, his path was unsure. While other young men his age were heading off to college, we were struggling to find an opportunity for Alex. His options were limited," she said. "Alex needed an opportunity to grow academically, socially and spiritually, with a sense of purpose outside of our home. When we discovered Able to Serve, we found a place for Alex to continue to grow and develop in a loving and safe environment. The staff and volunteers are exceptional, treating the participants with respect and love."

McDaniel said Able to Serve seeks to help those with disabilities become more independent, realize dreams and become valuable members of their community. He said Garner's sense of community and its people have helped Able to Serve become what it is today.

"There's always somebody helping somebody in some way," McDaniel said. "There's a general attitude here that you take care of your community and the people in it. I've been in Garner since I was 15, and I think that [everyone] from individual [citizens] to town leaders have been understanding and welcoming, regardless of a person's abilities."

White added that her work in the nonprofit sector is not work at all.

"There are days when we absolutely give a long sigh at the end of the day," she said. "But 90 percent of the time, we have such joy in watching people make small steps forward to be successful. There is a tremendous degree of fulfillment in doing the small things that make big things happen in the homes of the families that we serve."

Able to Serve's mission is to teach adults who have disabilities how to become more independent and use their abilities to serve others. Learn more about ways to get involved here.