'Nobody likes me': Trump ponders pandemic popularity of Fauci and Birx 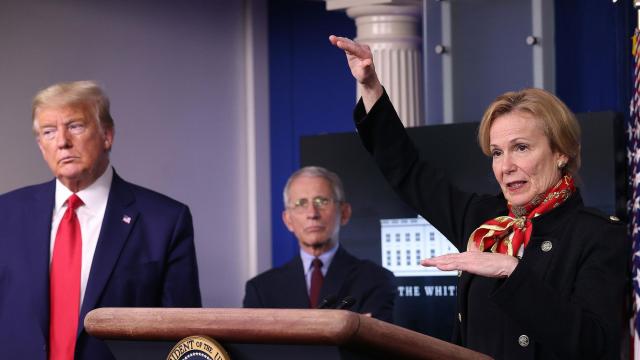 CNN — President Donald Trump said Tuesday his relationship with Dr. Anthony Fauci is "very good" but wondered why the doctor's approval rating is so high when his is so low.

Speaking a day after he retweeted a message claiming Fauci had misled the public, Trump chalked up his own sinking numbers to his personality.

But he said Fauci's broad respect should transfer to the Trump administration -- for whom Fauci works.

"I get along with him very well and I agree with a lot of what he's said," Trump insisted.

"So it sort of is curious," Trump said, "a man works for us, with us, very closely, Dr. Fauci and Dr. Birx also, very highly thought of -- and yet, they're highly thought of, but nobody likes me?"

"It can only be my personality, that's all," he said.

In a series of tweets Monday night, Trump retweeted false claims, including one suggesting hydroxychloroquine was a cure for coronavirus and a tweet that called Fauci a "fraud." Twitter took action on Tuesday and removed several tweets that were also retweeted by Donald Trump Jr., his son, and restricted the younger Trump's account.

Although Trump has maintained that he has a good relationship with Fauci, he has often sought to downplay the doctor's warnings against reopening the country too rapidly. The President has called Fauci "a little bit of an alarmist" and the White House has pushed comments made by Fauci early in the pandemic in a bid to discredit him.