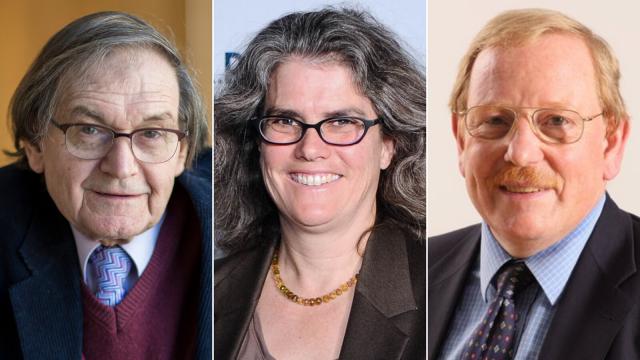 CNN — The 2020 Nobel Prize in Physics has been awarded to scientists Roger Penrose, Reinhard Genzel and Andrea Ghez for their discoveries about black holes.

This year's prize was about "the darkest secrets of the universe," said Göran K. Hansson, secretary for the Royal Swedish Academy of Sciences, said at Tuesday's ceremony in Stockholm.

Penrose, a professor at the University of Oxford who worked with the late Stephen Hawking, showed that black holes must be a physical reality -- proving Einstein's general theory of relativity. Genzel and Ghez discovered a supermassive black hole in the center of our galaxy, the Milky Way.

"Penrose, Genzel and Ghez together showed us that black holes are awe-inspiring, mathematically sublime, and actually exist," Tom McLeish, professor of natural philosophy at the University of York, told the Science Media Centre in London.

Ghez, born in New York City and a professor at the University of California, Los Angeles, is only the fourth woman to win a Nobel physics prize. It was awarded to a woman for the first time in 55 years in 2018, when Donna Strickland won for groundbreaking inventions in the field of laser physics.

"I think today I feel more passionate about the teaching side of my job than I have ever," Ghez said after the announcement. "Because it's so important to convince the younger generation that their ability to question, and their ability to think, is just crucial to the future of the world."

"I'm thrilled to receive the prize and I take very seriously the responsibility associated with being, as you said the fourth woman to win the Nobel Prize. I hope I can inspire other young women in the field," Ghez added. "It's a field that has so many pleasures, and if you are passionate about the science, there's so much that can be done."

Marie Curie, the only woman to have been honored twice by the Nobel committee, won the 1903 Nobel Prize in Physics and the 1911 Nobel Prize in Chemistry. Maria Goeppert Mayer was the only other woman to win the physics prize, in 1963 for discoveries concerning nuclear shell structure.

Penrose, born in Colchester in England, worked with fellow physicist Hawking to merge Einstein's theory of relativity with quantum theory to suggest that space and time would begin with the Big Bang and end in black holes.

"The Nobel legacy stipends that the committee cannot award posthumously. Professor Hawking's contributions are mentioned in the Nobel's scientific backgrounder in both the Penrose and Genzel-Ghez sections, giving a 'nod' to the British physicist," David Pendlebury, an analyst at Clarivate, which compiles an annual list of Nobel prize contenders based on research citations, told CNN.

"I can't tell you how delighted I am that Roger Penrose has been recognized with a Nobel Prize. For many outside of physics he has been seen as being in the shadow of his long-time collaborator, the late Stephen Hawking," added Jim Al-Khalili, a professor of physics at the University of Surrey.

"But while Einstein's general theory of relativity predicts the existence of black holes, Einstein didn't himself believe they really existed. Penrose was the first to prove mathematically, in 1965, that they are a natural consequence of relativity theory and not just science fiction," he told the Science Media Centre.

Genzel, born in Bad Homburg vor der Höhe, Germany, is director at the Max Planck Institute for Extraterrestrial Physics in Garching, Germany and a professor at the University of California, Berkeley.

Along with Ghez, he discovered that an invisible and extremely heavy object -- about the size of 4 million suns -- governs the orbits of stars at the center of our galaxy. A supermassive black hole is the only currently known explanation.

Last year's Nobel physics prize was also for cosmology, which Bengt Gustafsson, a Swedish astronomer and member of the Royal Swedish Academy of Sciences, said reflected the richness of the field.

"In those days, when I started, black holes were a formal solution to Einstein's equations... we didn't believe that it had any physical real correspondence. Penrose, in particular, showed that they can exist," Gustafsson, who is in his 70s, told CNN.

"We don't see the black holes directly, we see the effects of them and they are fantastic. They are the most brilliant objects in space."

The three Laureates share this year's prize -- 10 million Swedish kronor ($1.1 million) -- for their discoveries about "one of the most exotic phenomena in the universe," the Royal Swedish Academy of Sciences said.

This year's Nobel Prize in Medicine was jointly awarded to the US-UK trio of Harvey J. Alter, Michael Houghton and Charles M. Rice on Monday for the discovery of hepatitis C virus, which led to the development of tests and treatments.