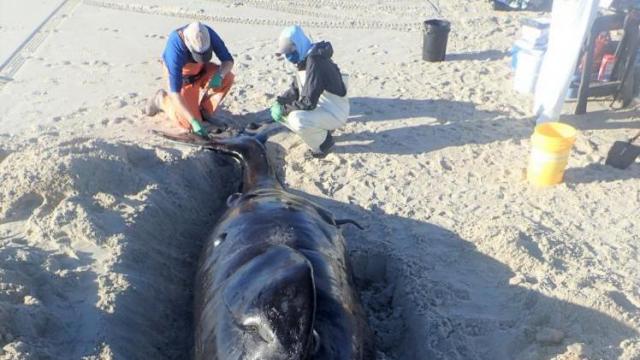 According to NOAA, it's the first documented time a newborn North Atlantic right whale calf has washed ashore dead.

"Each new right whale calf brings so much hope for this critically endangered species, and losses like this have a substantial impact on their recovery," a press release read. "Their population has been experiencing a significant decline and high juvenile and adult mortality in recent years."

Researchers said it does not appear the calf encountered humans before its death; rather, the newborn appears to have died during birth or shortly after.

Genetic samples were collected so scientists can try to identify the calf's mother.

According to NOAA, North Atlantic right whales are protected under the U.S. Endangered Species Act and the Marine Mammal Protection Act. Scientists estimate there may be fewer than 400 remaining.

At least 32 whales have died and 13 have been seriously injured over the past three years, NOAA said, representing more than 10% of the remaining population.