No, Tariffs Aren’t Going to Pay Down the National Debt 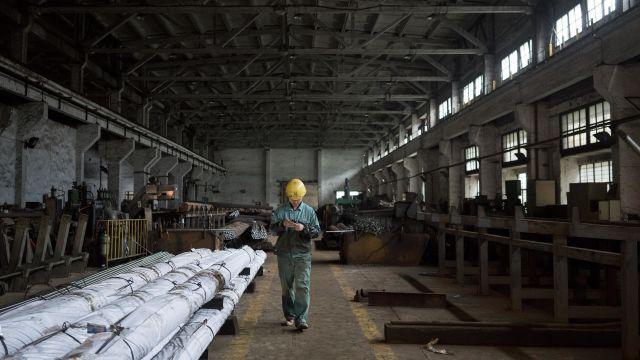 President Donald Trump has a new plan for how to pay down the national debt: Taxing U.S. consumers and businesses when they buy certain goods from countries subject to his tariffs.

Math is not on his side.

Trump contended over the weekend that the tariffs his administration has imposed on steel, aluminum and a variety of imported Chinese goods will soon begin to generate sufficient revenue to reduce the federal debt.

It’s a bold claim. Trump famously promised during the 2016 campaign to pay off the entire national debt as president. Reducing the national debt is not quite as ambitious as paying it all off but it is still a tall order.To reduce the debt, you must first balance the federal budget — and then go right on past that and start running a surplus, where the government takes in more revenue than it spends every year.

That means that to pay down any of the debt — let alone “large amounts” — tariffs will need to bring in at least $800 billion this year.

As it happens, the Treasury Department tracks how much revenue the United States collects from tariffs. By its calculations, that amount is going to clock in at about $40 billion as of 2018. That amount includes $35 billion that the Treasury has already taken in from tariffs over the past two years. So the additional amount coming in this year, as a result of Trump’s tariffs, is about $5 billion, or 1/160th of what Trump needs to begin retiring debt.

That amount could grow, but not by nearly enough.

But wait, you say. Trump has announced more tariffs could be on the way. Won’t they raise more money?

Yes, probably. Let’s assume every tariff Trump has proposed thus far this year goes into effect, at the maximum possible rate, and that American consumers keep buying all those imported products even if they are much more expensive. Those are dubious assumptions — particularly because consumers would likely switch their buying habits to favor goods not affected by tariffs — but let’s go with them for now.

That is a lot of money. It is a real boost to federal revenue, along with, in basically every economist’s model of how tariffs work, a tax increase on American consumers. And it remains at least $664 billion short of what you would need to start paying off debt.

Trump’s own policies are working against his debt goals.

The gap would be less daunting if not for some deficit-juicing laws that Trump signed in the past year. A compromise Congressional spending bill will increase military spending by $40 billion this fiscal year and nonmilitary spending by $54 billion. In 2019, that combined spending increase jumps to $139 billion, which would entirely offset the revenue gained from the Chinese tariffs and the auto tariffs, the CBO predicts.

Trump’s signature tax cuts are an even larger factor. They will reduce federal revenue by $163 billion this year and $285 billion next year, the CBO estimates.

History is against him, too.

There was a time when the United States raised most of its federal revenue through tariffs. It ended 100 years ago, after World War I.

In post-World War II America, tariffs have almost entirely disappeared as a significant revenue source. Trump could return tariff revenue to its high point of the last 50 years — under President Gerald Ford in 1975 — and still be a good $700 billion short of what he needs to pay down debt.

To get that kind of money from trade policy alone, Trump would need to impose a more-than 33 percent tariff on $2.34 trillion in imports — which is to say, every single good the United States imported last year.