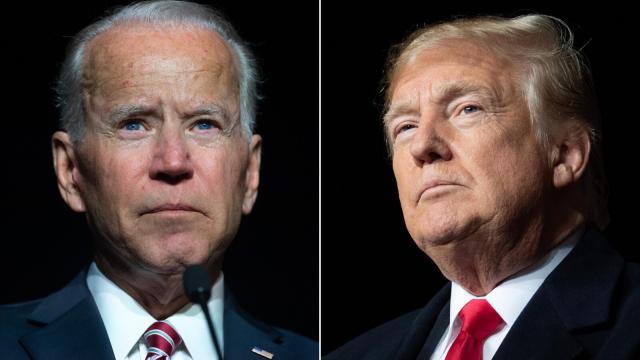 CNN — President Donald Trump and Democratic presidential nominee Joe Biden will forgo a handshake at their first presidential debate on Tuesday, one of several ways Covid-19 has impacted the way the candidates' first face-to-face showdown will play out.

Peter Eyre, a senior adviser for the Commission on Presidential Debates, said the candidates also won't exchange handshakes with the moderator, Chris Wallace of Fox News. Once on stage in Cleveland, Ohio, the three men will not wear masks.

The size of the audience will be limited compared to previous debates, and everyone attending the debate at Case Western Reserve University will undergo testing for Covid-19 and follow other health safety protocols.

Frank Fahrenkopf, co-chairman of the Commission on Presidential Debates, which is conducting the event, told CNN, the average in-person audience for a debate is around 900 people, with up to as many as 1,200 depending on the venue. But for this debate, he estimated 60 to 70 audience members would be seated in the debate hall Tuesday night.

Both first lady Melania Trump and Ivanka Trump will be in attendance at the debate, a White House official confirmed to CNN.

As they prepare to face off for the first time, Biden and Trump will each stand at podiums on stage -- the President on the right side of the stage looking at the audience and the former vice president on the left. Wallace will be seated at a desk facing the two candidates.

The candidates will not have opening statements, and Trump will receive the first question from the moderator. The 90-minute debate will focus on six topics -- "The Trump and Biden Records," "The Supreme Court," "Covid-19," "The Economy," "Race and Violence in our Cities" and "The Integrity of the Election."

Another sign of Covid-19's impact on the debate -- there will not be a media "spin room" where campaigns typically send supporters and representatives to make the case for their candidates after the debate.

The second presidential debate was initially scheduled to take place at the University of Michigan in Ann Arbor, but the school also backed out with the October 15 debate relocated to Miami.