Boris Johnson warns UK to prepare for no-deal Brexit. It could cost his reeling economy $25 billion next year 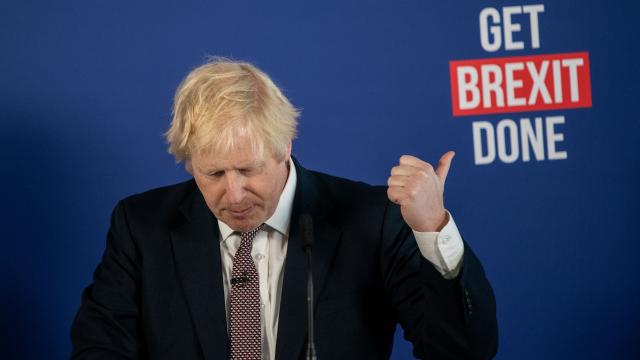 The British economy has been pummeled by the pandemic. Now, with talks on a new trade deal with the European Union at risk of collapse, Johnson has to decide: Does he try to find common ground with Europe, or walk away?

Britain already faces a tough 2021 as the country battles the twin shocks of coronavirus and Brexit. But failing to secure an agreement with the United Kingdom's biggest export market would amplify the pain.

Walking away empty-handed — which Johnson threatened to do on Friday — would create disruptions to trade when the transition period ends later this year, shaving more than $25 billion off the UK economy in 2021 compared to a scenario where a limited free trade deal is agreed, according to a CNN Business analysis based on forecasts from Citi and the Institute for Fiscal Studies. That would put the country even further behind on its efforts to recover from the historic shock triggered by the pandemic.

"The combination of Covid-19 and the exit from the EU single market makes the UK outlook exceptionally uncertain," Laurence Boone, chief economist at the Organization for Economic Cooperation and Development, said in a report this week. "Actions taken to address the pandemic and decisions made on future trading relationships will have a lasting impact on the United Kingdom's economic trajectory for years to come."

The clock is ticking for the United Kingdom and the European Union to come to terms, with Britain set to lose its favorable trading status with the bloc at the end of December.

Meetings this week concluded without any major breakthroughs, and Johnson said Friday that the country should prepare for a trading relationship that resembles Australia's. Australia does not have a comprehensive trade deal with the European Union. Most trade is conducted under more basic World Trade Organization rules.

There may still be some hope for a deal. Johnson stopped short of ruling out further talks, and EU Commission President Ursula von der Leyen tweeted Friday that her team would head to London next week to intensify negotiations as previously planned.

Fishing rights and the framework for resolving future disputes remain key sticking points for both sides, according to Mujtaba Rahman, managing director for Europe at Eurasia Group, a political risk consultancy.

"We don't think the deal will flounder on fish, but we do think the technical and political challenges it presents will be more difficult to overcome than many believe," Rahman said Thursday.

Johnson had said that terms of the future trading arrangement needed to be hammered out by mid-October to give businesses enough time to plan for the outcome. That deadline has now come and gone.

Rahman believes it's still in Johnson's best political interest to strike a deal, given the criticism of his management the Covid-19 crisis.

"As Johnson's government tears itself apart on coronavirus, the need for a political win, which only a deal can be, is greater than ever," he said.

The United Kingdom has in recent days opted for a regional approach as its coronavirus cases spike, reimposing strict rules in Liverpool and barring people from different households from meeting indoors in London starting Saturday. That's led to criticism from both those worried about the impact on the economy, and those who believe dramatic national measures are necessary to keep the situation under control.

The confusion over where Brexit goes next couldn't come at a worse time for the United Kingdom.

Citi and IFS estimate that the UK economy will contract by 9.4% this year. That would be the largest drop since 1921, according to data from the Bank of England. The additional restrictions coming into effect could make matters worse.

A disorderly break with the European Union on top of the coronavirus recession would only prolong the recovery.

With a limited trade agreement, the UK economy is due to bounce back with growth of 4.6% in 2021 before losing some momentum between 2022 and 2024, according to IFS and Citi projections. Failing to reach a trade deal with Europe would shave as much as one percentage point off that level of growth. The difference comes out to nearly £20 billion, or over $25 billion.

According to economists at Citi and IFS, even the best-case scenario of a limited trade agreement would leave the UK economy 2.1% smaller in 2021 than it would have been if the transition period was extended indefinitely.

With significant uncertainty clouding the outlook, businesses are expressing anxiety about the next few months.

In a survey of more than 950 executives released Friday by the Institute of Directors, roughly a quarter of respondents said they aren't sure they'll be prepared for the end of the transition period.

"The prospect of no deal would be daunting enough, let alone dealing with it in the middle of a global pandemic," IoD senior policy adviser Allie Renison said. "These disruptions won't cancel each other out. If anything they would compound the pain for British businesses."