No Artists Outshine Others in This Egalitarian Collection 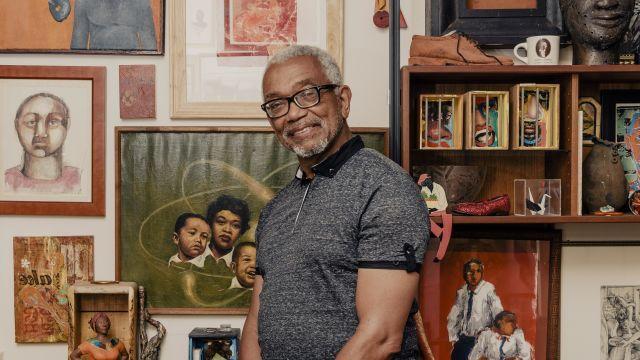 CHICAGO — Collector commitment levels vary widely: There is the casual art purchaser; the informed and systematic acquirer; and then, at the top of the pyramid, the fully committed zealot. Patric McCoy easily qualifies in the last category.

McCoy has some 1,300 works stuffed into his apartment here on the South Side, not too far from his alma mater, the University of Chicago. Across the street is the house where musician Muddy Waters lived for two decades.

The paintings, sculptures and drawings aren’t all necessarily by well-known artists, and McCoy likes it that way. In fact, he refused to let The New York Times photograph some ceramics by the biggest name on hand, the Chicago-based Theaster Gates. “I don’t like putting one artist over the others,” McCoy said. “I have a problem with celebrity emphasis.”

He spoke glowingly of several paintings by George Crump, a sculpture by Preston Jackson and a print by Larry Walker (the father of artist Kara Walker), but, given enough time, he would find similar praise for everything in the place. Intense, bright colors tie it all together.

McCoy, 71, is a retired chemist who co-founded Diasporal Rhythms, a group that collects the work of artists of African descent. In October, a show of some of their collections will be on view at the DuSable Museum of African American History, and some of the participants will open their homes for tours, too.

On a recent morning after working out, McCoy talked about his very precise and thought-out collecting philosophy. These are edited excerpts from the conversation.

Q: How did this get started?

A: In 1968 at the University of Chicago, my roommate was an art major, and he came back with a lithograph that he had done in class. I asked him what a lithograph was because I didn’t know. So he explained the process, and then I asked him if he was going to sell it. And we negotiated for $10. I bought it, and still have it to this day.

Q: And then it was off to the races?

A: It was slow at first. After doing it for a while, I started to understand that I actually was an art collector. There are so many different prejudices in the American scene that keep people from thinking of themselves as art collectors. We have been told through the media that you have to be super wealthy.

Q: What are the other negative messages?

A: That you have to be private, that you acquire things and you squirrel them away. And what you hear everywhere is that you have to know something about art, and that is such a bunch of malarkey. All you have to do is look at something and say, “I like that, and I want to buy it,” and then you’re an art collector.

A: My father, Thomas McCoy, was an accomplished artist in high school and received a full scholarship from the Art Institute of Pittsburgh. A month after sending him the acceptance letter, they sent him a letter saying he couldn’t come there because he was black. He never received any formal training after high school but he did painting, photography, commercial art and furniture design when he wasn’t working at the Glidden paint factory. The painting of our family was done at the height of the atomic war scare of the 1950s. He took a frightening symbol and made it a symbol of the family.

Q: As far as Chicago, what are your local inspirations?

A: At one point I was doing research on Jean Baptiste Point du Sable [the Haitian who is considered the founder of Chicago]. When he left in 1800 and had to sell his estate, the deed listed he had 23 paintings. And I realize this is in the wilderness, there are no roads — the city wasn’t even established until 1837, and he has all these paintings. So I’m thinking, “Oh, this city was founded by an art collector.” And so we’re just part of that tradition.