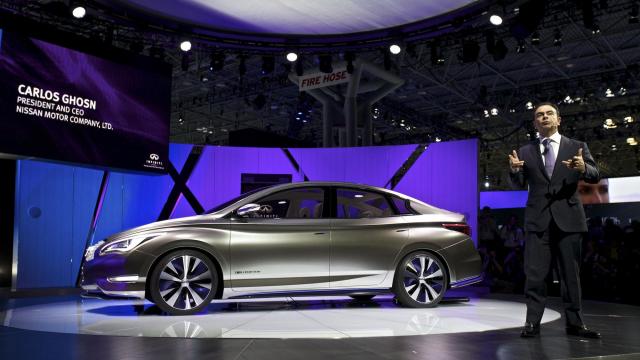 TOKYO — Carlos Ghosn, who created an alliance between Nissan and Renault that made it effectively the world’s largest carmaker, was arrested by authorities in Japan on Monday in a remarkable tumble for one of the industry’s most powerful and admired leaders.

Ghosn, a larger-than-life figure widely hailed for saving Nissan, reviving Renault, and rethinking how automakers could share technologies, was detained after an internal company inquiry found that he had underreported his compensation to the Japanese government for several years.

The alliance, which in 2016 was broadened to include Mitsubishi, accounts for 10.6 million cars sold annually. The arrest of Ghosn, who is chairman of Nissan, chief executive of Renault and chairman of the board at Mitsubishi, stunned the industry. It comes at an uneasy time: The companies face a slowing economy, a global trade war and a shift toward electric cars.

If the alliance were one entity, it could be considered the world’s largest automaker, on track to sell more cars than Toyota or Volkswagen this year — if it can match results in the first six months of this year, when it sold 5.5 million vehicles.

Hiroto Saikawa, Nissan’s chief executive, said he would recommend to his board, which will meet Thursday, that Ghosn be removed. “Needless to say, this is an act which cannot be tolerated by the company,” he said.

Saikawa, speaking at a news conference at Nissan headquarters in Yokohama, described Ghosn and Greg Kelly, a director who was also arrested Monday, as “masterminds” of a long-running scheme to mislead financial authorities. He offered few details, citing the prosecutors’ continuing investigation.

“I feel a big disappointment,” said Saikawa, who did not bow in deep apology before television cameras, as is customary in Japan. “And I feel frustration and despair, and indignation or resentment.”

Kelly was Nissan’s first American director, appointed in 2012, but had a much lower profile than Ghosn. Neither of the men could be reached for comment.

Renault, which owns 43 percent of Nissan, said Monday that its board of directors would meet “as soon as possible” to discuss the matter but offered no other details. Mitsubishi released a statement that it, too, would look to remove Ghosn.

Nissan said it was cooperating with Japanese prosecutors and that its investigation into Ghosn began after a whistleblower said he had misrepresented his salary and used company assets for personal purposes.

Born in Brazil to Lebanese parents and educated at elite universities in France, Ghosn made his reputation after joining Nissan in 1999. Renault, where Ghosn was an executive vice president, had bought a large stake in the Japanese company, which was on the verge of collapse at the time.

Ghosn made sweeping changes at Nissan, closing five domestic factories and cutting 21,000 jobs. Later, he engineered an arrangement between Renault and Nissan that allowed them to operate like a single carmaker. Short of a full merger, the alliance enabled them to share the cost of developing new models and to negotiate better deals with suppliers by buying components together.

As chairman and chief executive of the partnership, Ghosn was celebrated in Japan: His life story was made into a manga comic, although critics on the left noted he had earned his French nickname, “Le cost killer.” Still, he had enough political savvy to retain the support of the French government, which owns 15 percent of Renault, despite some bitter pay disputes.

In 2016 and 2017, Ghosn’s salary at Renault was questioned publicly, by French government officials and a shareholder group; this year he agreed to a 30 percent pay cut in return for another four-year term as chief executive.

Under Ghosn, the alliance overcame the kinds of differences in corporate and national cultures that have often doomed megamergers like the ill-fated marriage between Daimler and Chrysler, which was dissolved in 2007. Ghosn, the epitome of the globe-trotting, multitasking manager, was chief executive of Nissan and Renault from 2005 to 2017, flying between Paris and Tokyo every few weeks. He was also something of a media star, holding forth on panels at the World Economic Forum in Davos and celebrating his 2016 marriage at Versailles with actors dressed in 18th-century costume.

He earned a reputation as a hard-nosed manager who drew up rigorous business plans and kept close track of their progress.

“His world is the world of efficiency,” said Ferdinand Dudenhöffer, a professor at the University of Duisburg-Essen who follows the auto industry. “It’s the American style of management: clear plans, clear goals and permanently monitored.”

Dudenhöffer said it was questionable whether Nissan or Renault would have survived in the brutally competitive market for mid-price autos without Ghosn. In a measure of investors’ regard for him, Renault shares slid 10 percent on the Paris stock exchange Monday; Nissan shares fell 9 percent in trading in Düsseldorf, Germany.

He stepped down from the top job at Nissan last year but remained at the top of the alliance. Just last month he told reporters that he planned to stay in that post until 2020. Ghosn was paid 227 million yen in cash and stock options by Mitsubishi Motors last year. In insular Japan, where foreign leadership of domestic companies is rare, Ghosn’s downfall could be taken as a referendum on the perils of working with outsiders.

“He’s always the go-to when people say foreigners can never succeed in Japan,” said Pernille Rudlin, managing director of Rudlin Consulting, which specializes in intercultural consulting with Japanese companies. “Now there are no good examples left.”

Nissan has had stumbles recently. In October 2017, the company suspended production at all of its Japanese factories after discovering that uncertified technicians had conducted vehicle inspections. In July, the company admitted to falsifying emissions and fuel economy tests.

The misconduct allegations about Ghosn are of another order, analysts said.

“For Nissan, Mr. Ghosn is a big hero,” said Shin Ushijima, a lawyer who specializes in corporate governance. “This news is so embarrassing.”

At a news conference with the Belgian prime minister Monday, President Emmanuel Macron of France said it was too early to comment. But the French state, as a major Renault shareholder, would be “extremely vigilant about the stability of the alliance” between Renault and Nissan, he said.

Macron added that the French government would seek to maintain stability and “full support” for Renault’s workers. The company employs more than 47,000 workers in France.

Ghosn’s pay was long debated there. In 2016, Renault was pressured by Macron, the finance minister at the time, to reduce his compensation. In 2017, he insisted on a package of 7.4 million euros, about $8.5 million. The French government balked but Renault shareholders ultimately approved that payout.

In Japan, Ghosn’s compensation made him an outlier. Japanese executives typically earn far less than their U.S. or European counterparts. Takeshi Uchiyamada, chairman of Toyota, for example, was paid 181 million yen in 2017, compared to Ghosn’s reported 735 million yen.

Foreign investors tend to criticize Japanese companies as not paying executives enough. “For the Japanese market, the main concern from foreign institutional investors is the question of whether compensation will be less incentive driven,” said Hideaki Miyajima, professor of commerce at Waseda University in Tokyo. “The criticism of Japanese firms is that compensation is not related to performance, and Japanese leaders are less likely to take risks.”