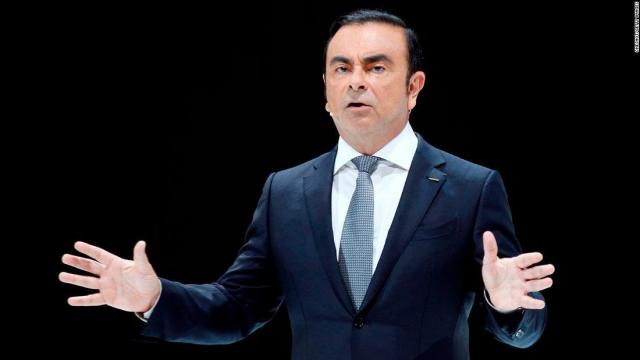 (CNN) — Nissan has removed auto industry legend Carlos Ghosn as chairman following his arrest earlier this week on suspicion of financial misconduct at the Japanese carmaker.

The vote by Nissan's board on Thursday ends Ghosn's reign at the top of the company dating back nearly two decades and could fracture a powerful alliance that he forged with France's Renault.

Ghosn was detained by Tokyo prosecutors on Monday following an internal investigation at Nissan (NSANY) that revealed "significant acts of misconduct" over many years, including understating his income in financial reports and misusing company assets. The Brazilian-born executive has not yet commented publicly on the allegations.

In a statement to the Tokyo stock exchange, Nissan said its directors, led by CEO Hiroto Saikawa, voted unanimously to remove Ghosn, and another director, Greg Kelly, from their posts.

Kelly has also been arrested by Tokyo prosecutors after being accused of wrongdoing by the company.

Nissan said it would set up a special committee to improve corporate oversight as well as find a replacement for Ghosn. Nissan did not immediately name an interim chairman.

Renault (RNSDF) earlier this week stopped short of removing Ghosn as its CEO and chairman as it waited for more details of the criminal investigation.

But Mitsubishi Motors (MMTOF), the third member of the global alliance Ghosn built, has asked its board of directors to "promptly remove" him as its chairman.

Ghosn is one of the auto industry's most high-profile executives.

Prosecutors allege Ghosn and Kelly collaborated to understate Ghosn's income by about 5 billion yen ($44 million) over a five-year period ending in March 2015. The maximum punishment in Japan for filing a false financial statement is up to 10 years in prison and a fine of up to 10 million yen ($89,000).

Nissan's statement Thursday described Kelly as the "mastermind" of the scheme.

Japanese public broadcaster NHK reported Tuesday that Ghosn had also failed to properly disclose homes provided by Nissan in four countries. NHK said that prosecutors suspect Ghosn may have pocketed money that was meant for other executives at Nissan.

Japanese prosecutors have yet to formally indict Ghosn on any charges. He is being held at a detention center, where prisoners are typically fed basic rations of rice and miso soup.

Prosecutors on Wednesday received authorization to detain Ghosn for a further 10 days.

Despite being stripped of their titles, both Ghosn and Kelly will remain members of the Nissan board pending a separate vote by shareholders. CNN has been unable to reach either of them for comment.

What next for the alliance?

This week's stunning developments have ripped through a powerful global alliance. The initial announcement slammed the stocks of all three carmarkers.

Together Nissan, Renault and Mitsubishi make one of every nine cars sold around the world. They employ more than 470,000 people in nearly 200 countries.

But the partnership is not one of equals. Nissan, which is much bigger and sells more vehicles than Renault, holds only a 15% non-voting stake in the French company. Renault holds a much more powerful 43% shareholding in Nissan.

Nissan said Thursday that the removal of Ghosn would not affect the alliance.

"The long-standing alliance partnership with Renault remains unchanged," Nissan said, adding it would try to "minimize the potential impact and confusion" on the three companies.

Analysts say the costs of the alliance failing would be huge. Travis Lundy, an analyst at investment research network Smartkarma, estimates that the companies save about 5 billion euros ($5.7 billion) every year by sharing technology and other resources.

"If the entire alliance blows up badly ... that would be the worst strategic mistake made by an automaker in decades," he said.