Nipple-sparing mastectomy an option for some breast cancer patients 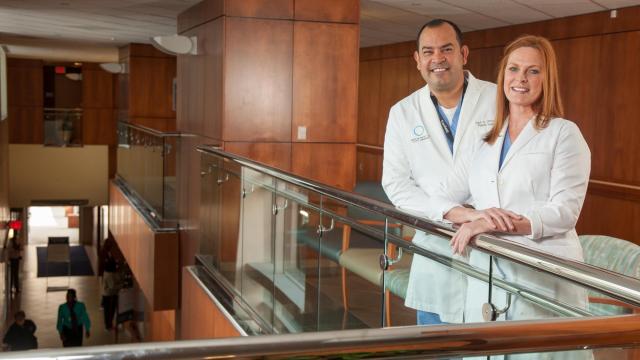 According to the American Cancer Society, approximately one in eight women will develop breast cancer sometime in their lifetime. It estimates that around 266,120 new cases of invasive breast cancer in women will be diagnosed by the end of this year.

While breast cancer remains the second leading cause of death in women (second only to lung cancer), death rates from female breast cancer dropped 39 percent between 1989 and 2017.

"These decreases are believed to be the result of finding breast cancer earlier through screening and increased awareness, as well as better treatments," stated the American Cancer Society.

Additional reconstructive surgery can be performed to recreate the breast using implants, giving the breast a natural appearance with the intact nipple; however, the function and sensory reception of the nipple will no longer be what they once were.

"It is a wonderful evolution in breast cancer treatment," said Dr. Elizabeth Sawyer, an oncology breast cancer surgeon with Cape Fear Valley General Surgery. "A generation ago, our grandmothers, when diagnosed with breast cancer, were subjected to what was called a radical mastectomy — removal of the breast gland, the skin, the nipple; removal of all the lymph nodes and the axilla, and even removal of the pectoralis major muscle."

Sawyer describes the nipple sparing surgery as "carving a pumpkin." Imagine that the skin of your breast, which includes the nipple areola complex, is the outside of your "pumpkin." Sawyer carves out the insides, making sure to remove all of the cancer.

"I carve the pumpkin so that your nipple areola complex is left behind. Then Dr. [Juan] Ortiz, the plastic surgeon, comes and fills the pumpkin back up. He can do that with either an implant or your own tissue ... to give you a new breast mound," Sawyer explained. "Before, our incisions were like a football around the nipple areola complex. Now my incisions are different and meant to be as hidden as possible."

For higher breasts, incisions for a nipple-sparing mastectomy can be placed in the inframammary folds, where the fold of the breast between your chest wall and the top of the stomach occurs.

For lower hanging breasts, an omega incision is placed above the nipple areola. Sawyer said the operating time, level of invasiveness and recovery time for a nipple-sparing mastectomy is comparable to that of a traditional mastectomy.

As a breast cancer surgeon, Sawyer said it's her job to make sure her patients are given the best operation to get rid of the cancer so they never have to deal with it again. But the aesthetic perks of a nipple-sparing mastectomy do appeal to certain patients.

"When we started doing this a decade ago, we had to do it on protocol — there were some pretty strict criteria that patients had to meet in order to qualify for being considered for nipple-sparing [surgery]," Sawyer continued. "What we were trying to do was ensure that the operation gave [a patient] the same oncologic — in other words, 'cancer free' — results [when] leaving the nipples there."

"There is no change in what we call recurrence rates in that breast," she continued. "It's becoming something that's much more mainstream for patients. What's nice about a nipple-sparing mastectomy is that it affords the woman a more natural appearance after the mastectomy."

Not all hospital and oncology surgical departments offer nipple sparing mastectomies as an option, making Cape Fear Valley Health a unique place for its surgical capabilities. However, not everyone is a good candidate.

Those with diabetes, those who smoke and those who are obese are not currently optimal candidates for the nipple sparing surgery.

Sawyer also explained that just because a patient qualifies for the surgery doesn't mean they opt into it, as people have different preferences, priorities and particular medical situations. Immediate reconstruction does not always accompany a nipple-sparing mastectomy either.

"About 70 percent of patients who undergo breast cancer treatment are going to go with a lumpectomy — not a mastectomy," Sawyer said. "Of that 30 percent [who get a mastectomy], not everybody should get immediate reconstruction. When you add reconstruction on to surgery, it can delay treatment because your risk of potential postoperative complications goes up. Even though it's a small risk, it's a real risk."

In cases where patients have advanced or aggressive cancers, Sawyer often recommends patients hold off on reconstruction until other treatments, like chemotherapy and radiation, are dealt with.

"It's such a very individual and deeply personal decision," said Sawyer, who feels privileged to do the work that she does.

"I would like people to know that they can get cutting-edge, world-class care when they're diagnosed with benign or malignant breast disease, right here in their own hometown," Sawyer said. "We're continuing to strive to bring cutting-edge procedures and technologies to our family members and our patients — because that's what they are, they're our family too."