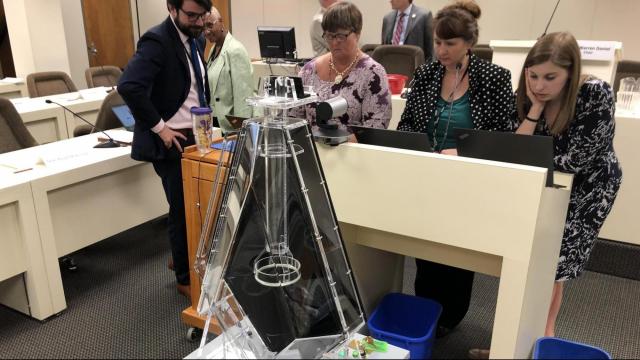 EDITOR'S NOTE: Nick Corasaniti covers national politics for The New York Times. He was one of the lead reporters covering Donald Trump's campaign for president in 2016.

Republicans are locking in newly gerrymandered maps for the legislatures in four battleground states that are set to secure the party’s control in the statehouse chambers over the next decade, fortifying the GOP against even the most sweeping potential Democratic wave elections.

In North Carolina, Texas, Ohio and Georgia, Republican state lawmakers have either created supermajorities capable of overriding a governor’s veto or whittled down competitive districts so significantly that Republicans’ advantage is virtually impenetrable — leaving voters in narrowly divided states powerless to change the leadership of their legislatures.

Although much of the attention on this year’s redistricting process has focused on gerrymandered congressional maps, the new maps being drafted in state legislatures have been just as distorted.

And statehouses have taken on towering importance: With the federal government gridlocked, these legislatures now serve as the country’s policy laboratory, crafting bills on abortion, guns, voting restrictions and other issues that shape the national political debate.

“This is not your Founding Fathers’ gerrymander,” said Chris Lamar, a senior legal counsel at the Campaign Legal Center who focuses on redistricting. “This is something more intense and durable and permanent.”

This redistricting cycle, the first one in a decade, builds on a political trend that accelerated in 2011, when Republicans in swing states including Pennsylvania, Wisconsin and Michigan drew highly gerrymandered state legislative maps.

Since those maps were enacted, Republicans have held both houses of state government in all three places for the entire decade. They never lost control of a single chamber, even as Democrats won some of the states’ races for president, governor and Senate.

All three of those northern states are likely to see some shift back toward parity this year, with a new independent commission drawing Michigan’s maps, and Democratic governors in Wisconsin and Pennsylvania will probably force the process to be completed by the courts.

Gerrymandering is a tool used by both parties in swing states as well as less competitive ones. Democrats in deep-blue states like Illinois are moving to increase their advantage in legislatures, and Republicans in deep-red states like Utah and Idaho are doing the same.

But in politically contested states where Republicans hold full control, legislators are carefully crafting a GOP future. They are armed with sharper technology, weakened federal voting statutes and the knowledge that legal challenges to their maps may not be resolved in time for the next elections.

North Carolina, Texas, and Ohio have signed into law new maps with a significant Republican advantage. Georgia is moving quickly to join them.

Republicans say that the growth of such heavily skewed legislatures is both the result of the party’s electoral victories and of where voters choose to live.

State legislative districts are by nature much smaller in population than congressional districts, meaning they are often more geographically compact.

As Democratic voters have crowded into cities and commuter suburbs, and voters in rural and exurban areas have grown increasingly Republican, GOP mapmakers say that they risk running afoul of other redistricting criteria if they split up those densely populated Democratic areas across multiple state legislative districts.

“What you see is reflective of the more even distribution of Republican and right-leaning voters across wider geographic areas,” said Adam Kincaid, director of the National Republican Redistricting Trust. Trying to draw more competitive legislative districts, he said, would result in “just a lot of squiggly lines.”

He pointed to maps in Wisconsin that were proposed by a commission created by Gov. Tony Evers, a Democrat. Under those designs, Republicans would still have a majority in both state legislative chambers (though with significantly smaller margins).

“They’re limited by geography,” Kincaid said. “There’s only so many things you can do to spread that many voters across a wide area.”

Democrats note that Republicans are still cracking apart liberal communities — especially in suburbs near Akron and Cleveland in Ohio and in predominantly Black counties in northern and central North Carolina — in a way that helps the GOP and cuts against a geographical argument.

“They are carving up Democratic voters where they can’t pack them,” said Garrett Arwa, director of campaigns at the National Democratic Redistricting Committee. He argued that Democratic map proposals “all put forth better and more fair maps that I would say are far from a Rorschach test.”

Democrats have fewer opportunities to unilaterally draw state legislative maps, particularly in battleground states. Of the 14 states where the margin of the 2020 presidential race was fewer than 10 percentage points, Democrats are able to draw state legislative maps in just one: Nevada. Republicans control the redistricting process in six of those 14 states. (The rest have divided governments, or their maps are drawn by commissions.)

But when Democrats have had an opening, they have also enacted significant gerrymanders at the state legislative level. In Nevada, Democrats are close to finalizing a map that would give them supermajorities in both chambers of the Legislature, despite President Joe Biden winning just 51% of the state’s vote last year.

The same holds true in deeply blue states. In Illinois, newly drawn state Senate maps would give Republicans roughly 23% of seats in the chamber, even though former President Donald Trump won more than 40% of voters in the state in 2020.

Republicans have taken two approaches to ensure durable majorities in state legislatures. The tactics in Texas and Georgia are more subtle, while Republicans in Ohio and North Carolina have taken more brazen steps.

In Texas and Georgia, the party has largely eliminated competitive districts and made both Republican and Democratic seats safer, a move that tends to ward off criticism from at least some incumbents in the minority party.

“Out of the 150 seats in the Texas House, only six of them are within 7 points or closer,” said Sam Wang, director of the Princeton Redistricting Project. Republicans now hold a 20-seat advantage in the chamber, 85-65, and the new maps will give the party roughly two more seats. So while the GOP lawmakers did not try to draw an aggressive supermajority, “what they really did a good job of there is getting rid of competition and getting a reasonably safe majority for themselves,” Wang said. Democrats in the Texas Legislature argue that the new maps are yet another reason that the party’s leaders in Washington must redouble their efforts to pass federal voting rights protections.

“As long as Democrats sit in this mañana moment and do nothing on federal voting rights legislation, there’s nothing to stop Republicans from getting whatever they want,” said Trey Martinez Fischer, a Democratic state representative from San Antonio.

Republicans in the Texas Legislature, however, say that the state’s maps are a fair representation of voters and that if any districts are unfair, it is largely the result of incumbents on both sides protecting themselves.

“Incumbents generally get to draw their own maps, so that’s how it’s done — it’s each member being able to draw it for their reelection,” said Briscoe Cain, a Republican state representative from the Houston area. “It’s a big state. We’ve got many regions and cultures. I believe the Texas House reflects those distinctions.”

In Georgia, where redistricting is ongoing, early maps follow a trend line similar to that of Texas as Republicans try to eliminate competitive districts.

With the current gerrymandered maps in place, Democrats in the state Legislature would have needed to win more than 55.7% of the vote to flip the Georgia House in 2020, according to the Princeton Gerrymandering Project.

The new maps proposed in Georgia maintain that 55% threshold, according to Princeton.

In Ohio and North Carolina, however, Republicans are taking a forceful tack. By keeping some districts moderately competitive, they are taking more risks in an attempt to create significant majorities or supermajorities — and in doing so, they are often flouting laws or court decisions.

In Ohio, after Republicans drew themselves supermajorities in both the state House and Senate in 2011, voters approved a ballot initiative creating a bipartisan commission to draw the maps and dictating that “no district plan should be drawn to favor or disfavor a political party.”

But this year, Ohio Republicans ignored the commission, creating a House map that favors roughly 67% of GOP seats and a Senate map that gives Republicans an advantage in roughly 69% of districts, preserving supermajorities.

“The suggestion we hear from Republicans in Ohio is that the Republicans hold the statewide offices, so that means that, ‘Oh, we prefer Republicans,’” said Emilia Strong Sykes, the Democratic minority leader in the state House. “And sure, maybe that is the case. But it is not in a 3-to-1 fashion that they have concocted in their minds and in their maps.”

In North Carolina, Republicans in the Legislature were forced by courts to redraw their maps twice in the past decade for obvious partisan gerrymandering. But with the opportunity to draw fresh maps, Republicans reverted to their old strategies, proposing maps that would give the party a 64-56 edge in the state House and a 32-18 advantage in the state Senate if the statewide vote were split 50-50, according to PlanScore.org, a nonpartisan site.

Both the Ohio and North Carolina legislative maps were met with immediate lawsuits, and North Carolina legislators were sued even before the maps were finalized. But the legal process for redistricting can take years, meaning that extremely gerrymandered maps can remain in place for multiple election cycles while challenges trudge along in the courts. Republicans are “willing to be a bit more aggressive in a state like Ohio and in North Carolina,” said Michael Li, a redistricting expert at the Brennan Center for Justice. “They’re daring the courts to strike them down.”