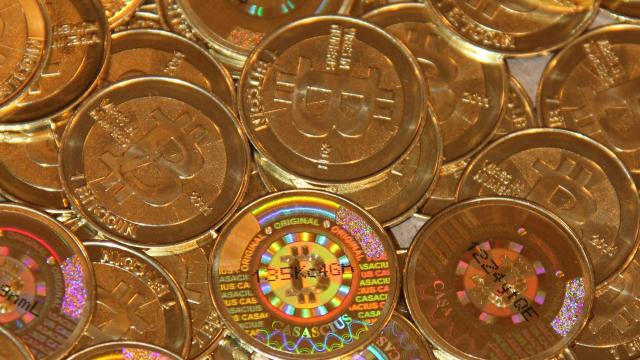 The virtual currency rocketed above $9,000 for the first time on Sunday and was trading above $9,500 by Monday morning in Asia.

Stock markets around the world have been on a tear this year, but their gains are paltry compared with bitcoin's. The digital currency, which only rose above $8,000 about a week ago, has surged an incredible 860% since the start of the year.

Despite skepticism from some top finance executives about bitcoin's rise, experts say the latest gains appear to have been fueled by expectations that big professional investors -- such as hedge funds and asset managers -- could soon pour money into the currency.

Even a small portion of the cash managed by major funds "would make a dramatic impact on the bitcoin market," said Thomas Glucksmann, head of marketing at Hong Kong bitcoin exchange Gatecoin.

The cryptocurrency has been gaining more legitimacy in some parts of the financial industry.

From early next month, investors should be able to trade bitcoin futures via the Chicago Mercantile Exchange, which is likely to help bolster the currency's reputation among mainstream investors. Futures allow traders to bet on the future price of assets like currencies, metals and agricultural commodities.

The backing of a major exchange is encouraging "institutional investors to actually pop their crypto cherries," Glucksmann said. He expects more professional investors to move money into bitcoin if it breaches $10,000.

The virtual currency has famously attracted the derision of JPMorgan Chase CEO Jamie Dimon, who called it a "fraud" that would "eventually blow up." But other leading figures in finance, including Goldman Sachs CEO Lloyd Blankfein have defended it.

Shane Chanel, an adviser at investment firm ASR Wealth Advisers, predicts bitcoin will hit $12,000 within the next six months.

"Greed will continue to drive the price over the short term," he said. But he warned that any setbacks in the introduction of bitcoin futures over the next few weeks could prompt a "dramatic short-term tumble."

Bitcoin's path toward $9,500 hasn't been smooth. It's suffered periods of major volatility along the way.

In September, it plunged as much as 20% after the Chinese government cracked down on offerings in the digital currency, prompting bitcoin exchanges to close their doors.

Earlier this month, it plummeted by up to 30% within the space of a few days, before quickly bouncing back, after it appeared traders were switching to rival cryptocurrencies.

Cryptocurrencies are virtual "coins" that are "mined" by computers completing complex algorithms. Bitcoin is the most famous and widely used one.