Newspaper confirms Obama not the Antichrist

Raleigh, N.C. — If you need any more proof that we are living in a strange world where obscure foibles can become worldwide sensations, look no further than the tale of a correction to a Lexington Dispatch letter to the editor headline.

The original letter, written by Boyd W. Thomas, of Welcome, N.C., was published during the first week of February. It leads with, "God states that seven kings must come before the rise of the Antichrist. Revelations 17:10 says the seventh king will reign for a short amount of time. Is Barack Obama the seventh king?" It then goes on to link the letter writer's theological interpretation to assertions made about the Obama administration. 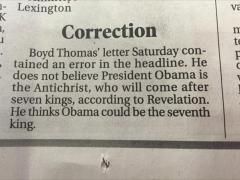 Apparently, the first headline the newspaper put on the letter suggested that President Obama might be the Antichrist, rather than just a precursor.  That headline prompted the following correction from the paper: "Boyd Thomas' letter Saturday contained an error in the headline. He does not believe President Obama is the Antichrist, who will come after seven kings, according to Revelation. He thinks Obama could be the seventh king."

That correction caught the attention of Michael Biesecker, an Associated Press reporter who grew up in Lexington and posted a photo of the notice on Facebook.

From his post, and perhaps a few other social media shares, the correction seems to have taken off, presumably because, given the tenor of modern political debate, the substance of the correction doesn't always seem to be assumed.

Fox Radio posted the correction on its website, as did newspapers such as The Houston Chronicle and Washington Times and outlets such as Daily Mail overseas. And, of course, new media firms such as Gawker, Talking Points Memo and Huffington Post weighed in.

All of that has brought the story back to North Carolina, where we're noting all the talk about the correction.

For those who got bogged down in all that "Love thy neighbor" stuff in the Bible and never made it to Revelation, the actual line in question is, "And there are seven kings: five are fallen, and one is, and the other is not yet come; and when he cometh, he must continue a short space." According to the U.S. Conference of Catholic Bishops, the Revelation to John "cannot be adequately understood except against the historical background that occasioned its writing. Like Daniel and other apocalypses, it was composed as resistance literature to meet a crisis. The book itself suggests that the crisis was ruthless persecution of the early church by the Roman authorities."