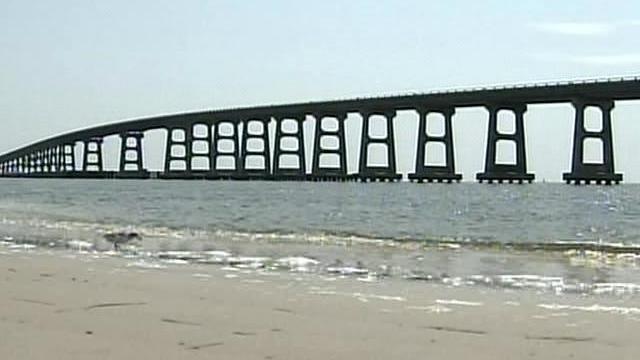 Perdue flew over the coastal inlet to see firsthand how shoaling sand has affected the waterway. People who have plied the waters for years say areas that used to be 20 to 30 feet deep now reach a depth of only 9 feet.

"This is a major artery, and if we don't get a private dredge in here soon, we're going to lose our commercial fishing," Perdue said. "We're dead in the water."

The U.S. Army Corps of Engineers is dredging the inlet daily, but it doesn't have the money to keep the Outer Banks channel at its congressionally authorized 14-foot depth by Bonner Bridge.

"They've done a great job of keeping a mess operable for us," said Billy Maxwell, captain of the commercial fishing vessel "Tuna Fever."

The Corps of Engineers estimates that restoring the inlet to at least 14 feet deep – and keeping it that way – would cost $20 million. The next federal budget allocates only $1 million to the project.

Perdue said North Carolina is willing to chip in money to keep the Oregon Inlet open to commercial boat traffic, but federal officials have told her the earliest they could get a second dredge to the Outer Banks is in June.

Mikey Daniels, the owner of Wanchese Fish Co., said he normally would have 20 to 30 commercial fishing boats unloading their catch at his dock, but the dock was empty Monday morning.

The governor's office says the Outer Banks region and the state could lose about $700 million a year if the inlet is closed.