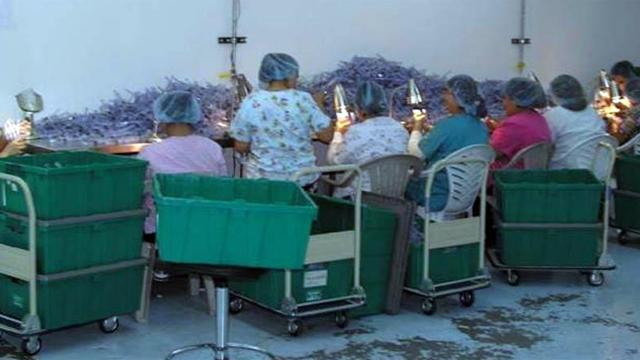 Authorities said he might have fled to his native India, and they are seeking help from Interpol.

Syringes from AM2PAT were taken off the market early last year and the Angier plant was closed following an outbreak of the bacterial infection Serratia in Colorado, Texas, Illinois and Florida. Five people died of the infection, and at least 100 others were sickened.

No cases were reported in North Carolina.

AM2PAT sold syringes filled with saline and heparin, a blood thinner. The syringes are used to flush intravenous lines during cancer treatments, kidney dialysis and other procedures.

The drugs weren't produced in Angier but were loaded into syringes there and were shipped to hospitals and clinics nationwide.

Federal prosecutors said plant operators failed to follow rules for checking sterility so that the production line would move faster. The syringes were supposed to be loaded in a sterile room, but photos displayed in court showed a room with peeling paint and a window fan held together with duct tape.

"This is a horrific case," U.S. Attorney George Holding said. "(Victims were) just taking the medicine that the doctor prescribed to try and make them better, and it ends up being the tainted product that makes them even worse."

In addition to the sloppy surroundings, plant managers knowingly backdated sterility testing logs to make it appear that the proper procedures had been followed, Holding said.

"It was entirely done for profit and greed," he said.

AM2PAT plant manager Aniruddha Patel and quality control director Ravindra Kumar Sharma each were sentenced Monday in federal court to four years in prison for fraud and allowing tainted drugs into the marketplace.

"The better trained that personnel are going into the industry, the better off we are preventing this kind of contamination in the future," he said.