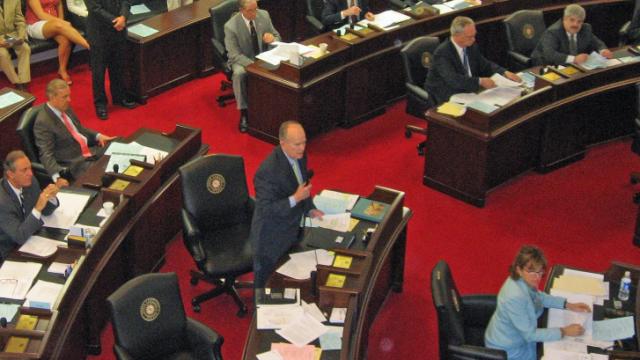 RALEIGH, N.C. — State lawmakers were back in Raleigh Tuesday and ready to work on the budget, though not necessarily as Gov. Mike Easley presented it.

The General Assembly reconvened at noon Tuesday to allow lawmakers to adjust the second year of the two-year state budget that they passed last summer.

Budget-writers said they hope to finish the budget adjustments and get them to Easley's desk before the new budget year begins July 1.

Easley presented his own ideas to lawmakers Monday, unveiling a $21.5 billion spending plan that would raise taxes on cigarettes and alcohol to fund a 7 percent raise for public school teachers and spend an extra $68 million on mental health programs.

The lawmakers reiterated their opposition to increasing taxes to balance the budget.

Berger, a Rockingham County Republican, also complained about the disparity in raises given to state employees. While Easley proposed giving a 7 percent raise to teachers to fulfill a campaign promise to move salaries to the national average before he leaves office next January, his budget calls for giving other state workers a 1.5 percent raise, as well as a one-time $1,000 bonus and an extra week of vacation.

"I think it will be difficult for us to pass a budget – a responsible budget – that includes an across-the-board increase of 7 percent for teachers," Berger said. "I think it's problematic to have a budget proposal that treats those state employees significantly differently than the remainder of state employees."

The budget proposal "looks like it was put together primarily to promote the governor's legacy" instead of to address pressing issues, he said.

"What I'm hearing is that it will be a difficult row to hoe for him," said Rep. Mickey Michaux, D-Durham.

Both Michaux and Sen. Vernon Malone, D-Wake, said lawmakers will have to come up with other ways to fund teacher raises and mental health spending. Easley said he is willing to listen to suggestions.

Peace College political science professor David McLennan said a bruising budget battle could ensue in what is supposed to be a short General Assembly session – and that could interfere with lawmakers' plans to campaign later this summer.

"Of all the budgets to come through, this could be one of the most contentious. The governor is not running again, and he wants to leave a legacy," McLennan said. "There could be a lot of head-butting."