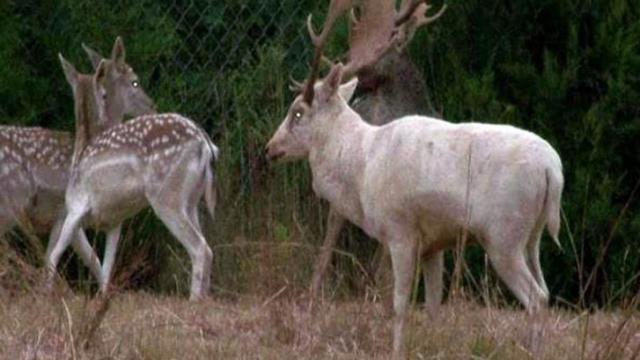 RALEIGH, N.C. — A meeting of the North Carolina Wildlife Resources Commission ended abruptly Thursday when a supporter of a couple whose nine deer were shot and killed by state wildlife staff last month tried to speak to the panel.

Commission Executive Director Gordon Myers had just explained that Wayne and Linda Kindley, who live in Randolph County, would have an opportunity to speak at a later meeting when a supporter stood up and tried to speak. Myers quickly adjourned the meeting, which was ending, before Jo Henderson could finish.

"I know you've heard of the deer slaughter," Henderson yelled as commissioners hurriedly left the room. "Shame, shame on all of you for inviting us to speak," then not allowing the discussion, she said.

Wayne Kindley also spoke out as the meeting ended, even though his wife put her hand over his mouth to hush him.

"You guys know you're in the wrong," he said. "That's why you're shutting us up and not listening to us."

Seven fallow deer and two white-tailed deer were killed Sept. 20 in a pen on the Kindleys' farm. Myers has said Kindley didn't have a license to keep captive deer.

"I really feel bad for the deer. They weren't bothering anybody, weren't harming a soul, were well taken care of," said Devan Causey, a neighbor of the Kindleys.

Wayne Kindley said he kept the animals because the fallow deer shed antlers that he used to make chandeliers and lamps.

Myers also said the deer had to be killed so they could be tested for chronic wasting disease, which he said can be done only on dead animals. The fatal and debilitating disease has been found in deer in 19 states, although not in North Carolina.

Wildlife officers said Kindley was warned about not having the proper permit. He did apply, but did not get the license, according to his lawyer, Matthew Altamura of Asheboro, who declined to elaborate.

He has been charged with holding deer in captivity without the proper license, which is punishable by a $10 fine. He will have his case heard before a judge in Asheboro on Oct. 25.

Since the deer were shot, the Kindleys' neighbors and people they've never met have rallied to their cause. More than 7,000 people from at least 25 countries had signed a petition on the website change.org as of Thursday afternoon.

Henderson also gave the commission petitions with the names of more than 2,000 people at the start of the meeting.

She said Myers had invited her to the meeting, which she thought meant she could speak. Commission officials explained that anyone could attend because the meeting was public, but only people on the agenda could speak.

That didn't sit well with Henderson, who complained outside the meeting as she waited for Altamura.

"They stomped on our Fourth Amendment rights" against unlawful search and seizure, she said. "They're not going to stomp on our First."

Altamura, who asked the Kindleys not to comment after the meeting, said the search warrant that wildlife officers used to get on the Kindleys property didn't authorize that the deer be killed.

"The warrants said to seize and hold," Causey said. "That means they should've put a chain around his gate (to) hold deer for further testing or tranquilize the deer, take them to their facility and test them their way. I didn't see any reason for death to be involved.

"I feel like there was a bunch of trigger-happy people."

As the meeting was winding down, Myers explained that the commission's executive committee would review the petition. The Kindleys and their supporters will be allowed to speak to the commission at an appropriate time, he said.

That's when Henderson interrupted and Myers adjourned the meeting.

Altamura also tried to speak at the meeting, asking about a proposal that refers to fallow deer as not being susceptible to chronic wasting disease. He was told the meeting wasn't a public hearing and he couldn't speak.

After the meeting, commission spokeswoman Carolyn Rickard said the disease hasn't been found in fallow deer in the wild. But the disease continues to morph, affecting different animals and captive animals are more susceptible, she said.