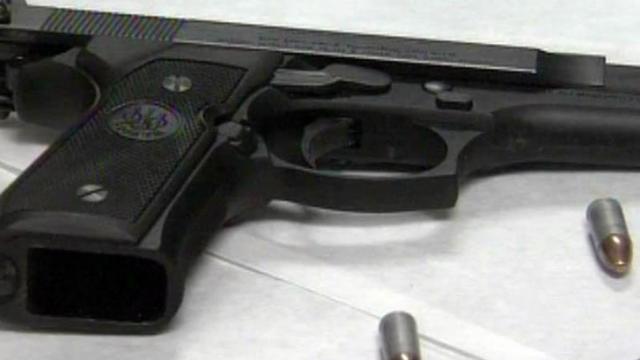 Raleigh, N.C. — Rep. Mark Hilton, R-Catawba, has been one of the most active proponents of gun rights in the North Carolina General Assembly. He was a driving force behind expanding the "Castle Doctrine last year and this year is pushing a measure to allow gun owners to carry their concealed weapons in places that serve alcohol.

Under current North Carolina law, gun owners cannot bring their weapons into restaurants, bars or other places that serve alcohol. Under Hilton's bill, a concealed weapons permit holder could bring a firearm into the business as long as he doesn't drink. Individual business owners would still have the right to prohibit firearms on their property.

That measure has passed the House and one Senate Committee. It is pending in another Senate committee, but some gun rights activists are worried the General Assembly will leave for the year without sending the measure to the governor. Hilton said Senate leaders assured him last year that the measure would get through their chamber.

"They told me they would hear it and pass it in the short session," Hilton said, referring to the current legislative session. "So, I'm going to hold them to that, to keep their word."

Among the basic arguments in favor of expanding the rights of those with conceal weapons permits is that they are law-abiding citizens with very low rates of permit revocation.

And when Hilton argued for the bill before the Senate Judiciary II Committee, he brought up another argument favored by pro-gun lobbyists:

"Since 1995 when Conceal Carry passed in this state, violent crime has gone down almost 30 percent," Hilton said.

Is that in fact the case?

At first blush, the numbers seem to be on Hilton's side. According to statistics kept by the N.C. Attorney General's Office the raw number of violent crimes – murders, rapes, robberies and aggravated assaults – has dropped. In 1995, there were 45,016 such crimes throughout the state. In 2010, the last year for which state level data is available, there were 34,033 such crimes.

That, Hilton said, argues for fewer "gun-free zones" like restaurants that serve alcohol.

"We think that where these gun-free zones are, criminals think they have a better chance of committing their crime."

But can concealed-carry laws really account for the drop in crime North Carolina has seen since 1995?

"I don't know if you can contribute it all to conceal carry," Hilton said, but he insisted some part of that drop in crime is due to more responsible, armed citizens. More than 275,000 North Carolina residents hold active concealed weapons permits, a little less than three percent of the population.

"The tools that we have show a long-term, steady decline in violent crime and property crime both nationally," said James Brunet, an associate professor and crime expert at N.C. State's Department of Public Administration. "We really don't exactly know why. We've had so many different crime policies over the past 20 years which may have contributed to the drop, but we can't disentangle them."

Brunet said it's unlikely that any one policy is the "magic bullet" that has lowered crime.

"There's no firm, solid evidence that the growth in concealed weapons permits has contributed to a drop in crime rates," said James Alan Fox, a criminologist at Northeastern University in Boston.

Among the reasons most criminologists think crime is dropping, he said, are better policing strategies, an end to the crack cocaine epidemic and high rates of incarceration. Even the fact that more Americans have cameras in their phones, and are able to capture crime as it happens, may have contributed.

Fox notes that crime rates have dropped even in states like Massachusetts, which have very restrictive gun laws.

At least one academic has put forward the theory that a higher availability of guns lowers crime. John Lott, author of the book More Guns Less Crime is often cited by proponents of expanding concealed-carry laws.

But as PolitiFact noted when a claim by the head of the NRA that "violent crime in jurisdictions that recognize the Right to Carry is lower than in areas that prevent it," Lott's work is deemed flawed by many other academics. Fox called it "controversial" and said that it was not widely accepted.

And as PolitiFact also noted, a National Academies of Sciences report in 2005 said current crime data doesn't allow policymakers to draw a conclusion one way or the other.

"The evidence to date does not adequately indicate either the sign or the magnitude of a causal link between the passage of right-to-carry laws and crime rates," reads one conclusion in the report.

Hilton adds one note. In 1995, he said, many worried out loud that offering concealed weapons permits would lead to a Wild West mentality and cause violent crime to go up.