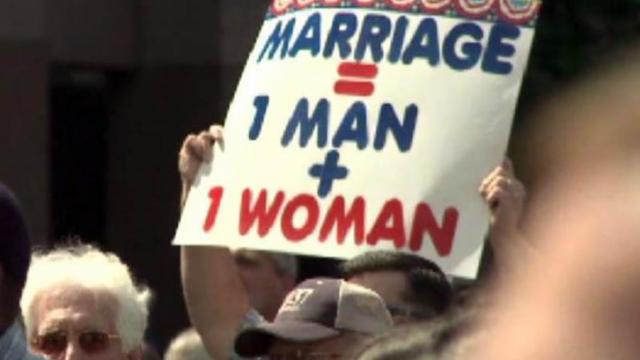 Raleigh, N.C. — A proposed constitutional amendment that would define marriage in North Carolina as being between one man and one woman has broad support among voters statewide, according to a new WRAL News poll.

Amendment One, which would effectively bar any same-sex union in the state, will appear on the May 8 primary ballot.

SurveyUSA polled 1,001 likely voters across North Carolina between last Friday and Tuesday and found that 58 percent support the referendum. Thirty-six percent of voters oppose it, and 6 percent remain undecided.

The poll has a margin of error of plus or minus 3.1 percentage points.

Although North Carolina law already prohibits same-sex couples from marrying, it is the only state in the Southeast without such restrictions written into its constitution.

The marriage amendment has split the state in recent months, with even President Barack Obama and the Catholic church weighing in. Obama spoke out last week against the amendment, and North Carolina's two Catholic bishops responded Wednesday by calling the president's position a "disappointment."

Amendment opponents say the measure would enshrine discrimination in the North Carolina constitution and could have unforeseen consequences.

"Any time the majority makes decisions on behalf of the minority, it's hurtful. It's wrong," said Anthony Pugliese, who is raising two daughters with his partner of 15 years, Alex Mancuso.

The amendment is "taking a bad law and making it even more pronounced. It's elevating it to another level," Pugliese said.

Mancuso said the couple view themselves as a normal and traditional family.

"The way we're bringing the children up with love and caring (and) trying to make them as healthy as they can be, that's why I guess I'm saying we're traditional," he said.

Supporters say marriage is not a right, and the amendment would protect the traditional institution of marriage from court rulings allowing same-sex couples to wed.

"The point is, we're trying to allow the people to decide by allowing them to vote May 8th and not allow an activist judge to decide for us," supporter Tyler McNabb said. "Marriage is an institution that was created by God."

Both sides have held rallies in recent weeks to energize their bases in advance of the primary.

The WRAL News poll shows the amendment has broad support across most segments of the population.

More than 60 percent of men and 55 percent of women back the proposal. Along racial lines, 61 percent of white voters and 56 percent of black voters support it.

Support for the amendment appears to increase with age, from 50 percent among 18- to 34-year-olds to 65 percent among those age 65 and older.

Independent and moderate voters were the only demographic segments where amendment opponents held a slight advantage – although it was within the margin of error in both instances.

Among independents, opposition to the amendment is running at 47 percent, compared with 45 percent for supporters. Democratic voters are evenly split on the issue at 46 percent a side.

Voters identifying themselves as moderate oppose the amendment by a 46 to 44 percent margin.

A recent Elon University poll found that 58 percent of North Carolinians oppose the amendment, with 38 in favor of it. That poll surveys adults statewide, while the WRAL News poll includes the results only of likely voters.

McNabb called those numbers "a red herring" that distracts from the overall debate on the amendment, but Pugliese said he thinks they show that people don't really understand the amendment.