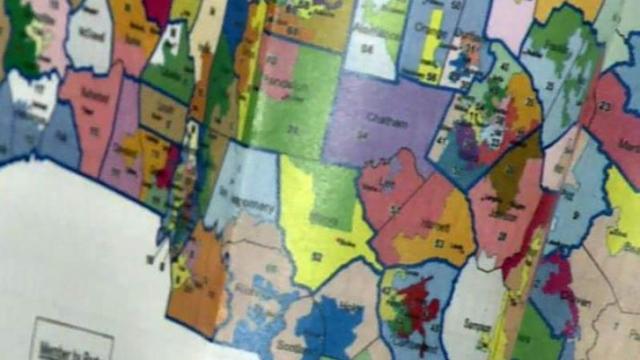 Raleigh, N.C. — North Carolina taxpayers have shelled out $695,000 in the past year for outside legal help on the state’s new voting maps – four times what they paid in the previous redistricting cycle from 2001 to 2010 – and the bill is still growing.

According to public records obtained by WRAL News, Republican legislative leaders have paid $570,981 to the Raleigh law firm of Ogletree, Deakins, Nash, Smoak and Stewart and $124,067 to the Washington, D.C., law firm of Jones Day. Both firms gave the state a 10 percent discount on fees.

The principal at Ogletree Deakins is Thomas Farr, a noted North Carolina redistricting expert who’s litigated other map cases in the past. Phil Strach, former legal counsel for the North Carolina Republican Party, also works for the firm. Both men have advised Republican leaders throughout the process.

Jones Day specializes in, among other things, helping states get their proposed maps through the U.S. Department of Justice's pre-clearance process. In this case, Republican leaders also filed suit in federal appeals court that covers Washington as an “insurance policy” in case the Justice Department was slow to respond. Jones Day apparently handled that, too.

A third contract between the state and Friedman Partners amounted to $3,240 for processing data from past elections and voter registration, a crucial step in determining where lines should be drawn.

The itemized invoices also show payments made through the law firms to outside consultants.

Through Ogletree Deakins, taxpayers paid GOP redistricting expert Thomas Hofeller $50,163 from last April through November. Hofeller has directed redistricting efforts for the Republican National Committee for the past three cycles.

Also through Ogletree Deakins, a second redistricting expert, Thomas Brunell, was paid $15,000 in June. Brunell is a political science professor at the University of Texas and author of the 2008 book, “Redistricting and Representation: Why Competitive Elections are Bad for America.”

Through Jones Day, the state paid $2,550 to Polidata, a political data analysis firm, for “general consulting.”

In the last cycle, only one taxpayer-funded consultant was listed: NC Democratic operative Kevin LeCount, who was paid about $2,500.

“Our decision to retain award-winning representation at competitive rates has provided voters with the certainty that was lacking in the last redistricting process,” they said, calling the current cycle “the most efficient and successful North Carolina redistricting effort in modern history.”

Lewis and Rucho said their legal counsel had headed off potential disruptions or delays in the election process. “By investing in high-quality legal representation on the front end, we are saving a great deal on the back end,” noting that an extra election could have cost $5 million to $6 million.

No lawsuits against the redistricting plans were filed until early November. At that time, the outside legal bills had already surpassed $444,000.

“An obligation exists to defend the state, and so far, that is being done successfully,” added Rucho and Lewis, pointing out that Democrats also hired outside counsel in the past two cycles.

Under state law, the obligation to defend the maps resides in the Attorney General’s Office. Attorney General Roy Cooper has had attorneys Alec Peters and Susan Nichols assigned to this case for months. Cooper’s office couldn’t immediately say how much that cost.

The outside legal fees are over and above those expenditures.

Damon Circosta, executive director of the North Carolina Center for Voter Education, said he isn’t surprised by the $65,000 spent on outside experts. He says Hofeller is “the GOP’s gerrymandering guru.”

Under the prior congressional maps, North Carolina's partisan split was seven Democrats to six Republicans. It's now likely to be 10 Republicans to three Democrats.

State House and Senate maps went from a slight Democratic edge to a landslide 3:2 Republican advantage in both chambers.

“Everyone understands that redistricting is for all the marbles. That’s why they spent so much money – they wanted to make sure they locked this down,” Circosta said. “If you’re looking for somebody who knows how to draw partisan districts, these are your guys.”

“The Democrats would have loved to have had the opportunity to spend this kind of money for this kind of outcome,” he said. “In all this partisan squabbling, it’s the voter who ultimately ends up losing.”

He said the $695,000 spent on the new maps would be a substantial down payment on an independent redistricting process, like one used in Iowa.

Democrats say Republicans shouldn't have used taxpayer dollars to draw themselves into power for the next decade.

"Clearly, Republicans in the General Assembly will stop at no expense to ensure that their extreme partisan majority is locked in for years to come,” North Carolina Democratic Party Chairman David Parker said. “Make no mistake about it, Republicans excessively used taxpayer resources to divide our communities, isolate minority voters and to further their discriminatory agenda against North Carolina's women."

In the 2001 cycle, said party spokesman Walton Robinson, Democrats raised private money to pay for the legal fight over the partisan maps they drew. He said Republicans should have done the same.