North Carolina will be a hotbed of political activity during the 2020 general elections. You can track how campaigns and other groups spend their broadcast ad dollars in the races for governor, lieutenant governor, U.S. Senate, U.S. House and state legislative races since Jan. 1, based on a WRAL News analysis of estimated spending data from Kantar Media.

We're not tracking spending in the presidential race, but you can look for that in FiveThirtyEight's tracking app. 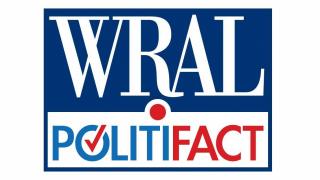 You can also cut through the noise on North Carolina's airwaves through WRAL's partnership with PolitiFact, the Pulitzer Prize-winning organization fact checking claims by elected officials and others on its Truth-O-Meter scale.

See an ad you want us to check? Send us a suggestion here.

WRAL News uses data from Kantar Media's Campaign Media Analysis Group, which monitors political advertising on broadcast networks and provides estimated spending on each ad as it airs. Tracking includes ads from governor, lieutenant governor, U.S. Senate, U.S. House and state legislative races in North Carolina only. The data includes each ad's tone, political affiliation, buyer and race, among other metrics. The statistics on this page include tallies dating to Jan. 1, 2020, when WRAL began monitoring the data.