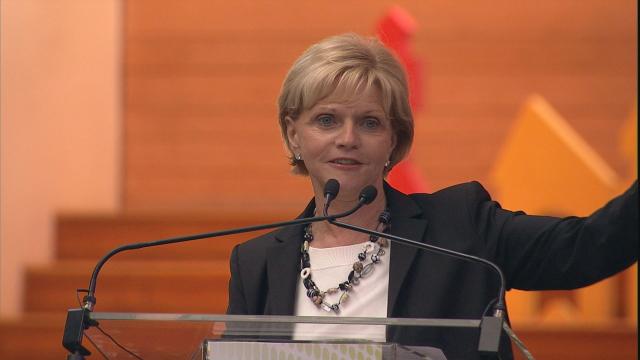 Presumed GOP gubernatorial hopeful Pat McCrory won't officially announce his campaign till January, but Gov. Bev Perdue sounded like she was already on the stump at an event in Raleigh today.

Speaking at the "Big Idea" Forum, a conference about the importance of play to innovation and creativity in the workforce, Perdue took the opportunity to air out what sounded like a campaign speech on GOP cuts to education funding.

"The heart and soul of North Carolina is at risk here, my friends," she told about 300 business and community leaders gathered at Marbles Museum. "You all are the leaders of this great state, and you have to decide fundamentally in your heart who you are and what you stand for and what you believe in."

In a short but impassioned speech that sounded like a page out of her mentor Jim Hunt's playbook, Perdue urged the audience to support education spending as an investment in the state's future workforce.

"If you believe that the Big Idea's important enough for you to give up a couple of hours of your time on a beautiful Wednesday afternoon," she asked them, "do you not equally believe that that opportunity for every little child in this state to get the toolset to think and have a dream about a Big Idea is transformative for NC?"

There was no question-and-answer session after the speech, but Perdue did speak briefly with reporters outside.  More on that here.