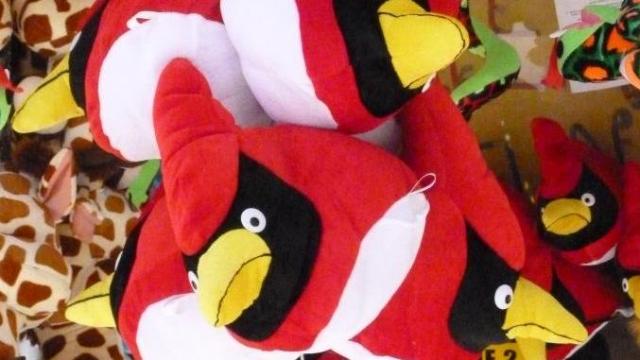 I have mentioned before how surprised I was at the number of Angry Birds items at the Dixie Classic Fair. It just seemed strange that they would be so popular. I mean, it's a casual game, right? I don't recall seeing any FarmVille cows as prizes or stuffed Peashooters from Plants vs. Zombies. (Of course, there's always next year.)

(If you're not familiar with it, Angry Birds is a computer game where birds are catapulted from a slingshot in an effort to kill pigs.)

Because of all the Angry Birds at Dixie Classic I wasn't surprised to see them at the NC State Fair, but I was surprised and intrigued to see a "real life" Angry Birds game on the old midway.

It looks like a reworked "throw a ball, knock over a clown," game.
Stuffed Angry Birds are grouped around a slingshot. You get one shot
($2) or three shots ($5) to knock over a pig target. Knock over a pig, of course, win a prize, and the more pigs the bigger the prize.
Needless to say the midway game of Angry Birds is far more straightforward than the computer game, but there's something viscerally satisfying about a giant slingshot. The prizes include Angry Birds characters, of course, but also a character from Despicable Me (!) and Pikachu (!!)

After seeing this game I wasn't surprised to see other Angry Birds pop up all over the fairgrounds, so I started making a list. If I missed any let me know in the comments:

1) Midway Prizes -- Several "Red Birds" and a few "Blue Birds." The green pigs were not much in evidence. I wonder if the midway operators ran out before they got here?

4) Lego -- A Red Bird, rendered in Lego, can be seen in the Hobbies & Crafts building. (Congrats to the 9-year-old who won third place for that original Lego creation!)

5) Egg -- Also in the Hobbies and Crafts building is a 2nd place egg which looks much like an Angry Bird, but which may simply be a cardinal (the State Bird of North Carolina.) I'll have to mark this one "maybe."

If this trend continues the midway could get quite a makeover. How about "Whac-A-Green-Pig" or "Skee Bird"? A turkey shoot with slingshots? Hmmm ...