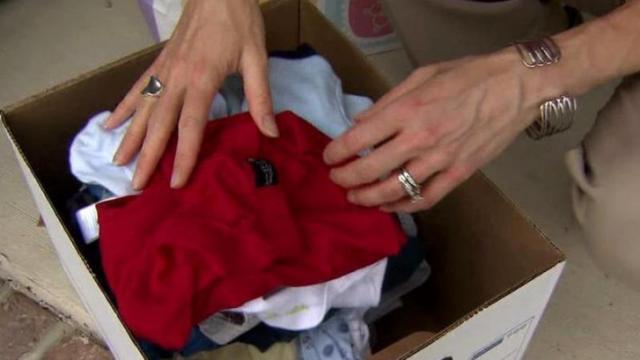 Raleigh, N.C. — One of the easiest ways to give to charity and clear cutter at the same time is to donate items, such as clothes, toys or furniture. While some people donate locally, others rely on out-of-state companies to haul their items away.

The WRAL Investigates team gave several items to an out-of-state cancer charity and found that they were sold in a thrift store with a small portion of the sale going to the cause.

The American Cancer Research Center and Foundation is based in Texas and distributes fliers in the Triangle, Pennsylvania and Florida, offering to pick up homeowners’ unwanted items and turn it into cash for a cause.

The foundation’s tax returns show it collects millions of dollars worth of goods each year. It then sells those goods to a thrift store and collects 9 percent of the retail price, meaning the foundation gets 90 cents on an item sold for $10.

Old clothes, toys and a small table were among several items the WRAL Investigates team donated to the foundation. Raleigh private eye Catherine Flowers helped track their path with the help of hidden GPS devices.

The GPS tracker showed the donation ended up at a Largo, Fla., thrift shop. Without a tracking device, it can be tough to follow charitable donations. The thrift store chain has stores in Pennsylvania and Florida, but doesn't have a website. Even finding a phone number was difficult.

The Texas charity that took the items to the thrift shop also has offices in Pennsylvania and Florida. Corporation filings show the thrift store and charity share the same address in Florida, along with the same agent’s name.

Charity Navigator, which rates charities, says the American Cancer Research Center Foundation has several red flags, including a board that is made up mostly of relatives and fundraising costs that are too high.

"This charity is woefully inefficient as it spends nearly 40 percent of its budget on fundraising and only 50 percent on its charitable programs! As a point of reference, the vast majority of the 5,500 charities we rate spend only about 10 percent on fundraising with 75 percent or more devoted to their charitable mission," Charity Navigator spokeswoman Sandra Miniutti said in a statement.

"It is troubling to note that the charity doesn’t have at least five independent Board members that constitute a voting majority," Miniutti added. "We believe it is very important that a charity have an independent governing body to allow for full deliberation and diversity of thinking on governance and other organizational matters. Oftentimes, charities that do not meet this basic criteria have been involved in scandals."

The WRAL Investigates team spoke with the charity’s business manager, Brian Slaga, whose father – a cancer researcher – started the charity.

“We really try to focus on (cancer) prevention,” he said, adding that $128,000 was donated to cancer researchers last year. “We are guaranteed 9 percent regardless – 9 percent of gross sales, regardless of how well the (thrift) store does.”

One of the researchers who has benefited is in the Triangle.

University of North Carolina at Chapel Hill researcher Dr. David Kaufman received $10,000 this year, with $30,000 more promised by August. He said he’s thrilled the money will help pay for expensive analysis of his data and that, from his perspective, groups like Slaga’s help fill a void.

“The university has catalogs full of sources of that sort,” Kaufman said.

Slaga said he believes his charity will grow and will continue helping cancer research.

“Being an entrepreneur, I completely believe in this. I would like to say in 25 to 30 years, ‘Hey, yeah, I helped to start that,’” Slaga said.

The WRAL Investigates team told the Florida thrift store about the GPS tracker. It has been disabled.

For information about charities, visit Charity Navigator or GuideStar. To find charities that pick up household goods, visit Donationtown.org.