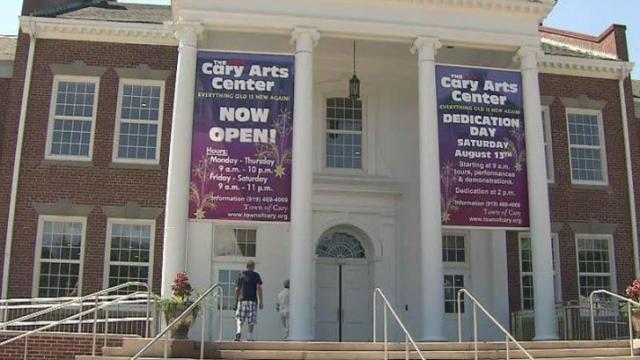 Cary, N.C. — Workers are busy putting the finishing touches on the $13 million Cary Arts Center before its official opening this weekend.

The center, at 101 Dry Ave., includes an art gallery, a 400-seat theater – it has already hosted a concert series and a play – a ceramics studio and classrooms for arts programs.

"We wanted to showcase the wonderful art we have just within our community," said Lyman Collins, Cary's cultural arts director.

The arts center is in a building that housed three schools at various times over the past 140 years, Collins said.

"It was very important for us to keep the history alive in this building while recognizing it's new," he said.

Cary recently purchased the town's first indoor movie theater, on East Chatham Street, and plans to renovate it into a second cultural arts facility by late 2012.

"We're interested in more development downtown, and I think it's going to bring that along," said Ralph Ashworth, who owns Ashworth's Drugs on Chatham Street. "It's all about traffic, and some of (the visitors) will trickle down here – and that's a good thing."

The Cary Arts Center dedication ceremonies run from 9 a.m. to 5 p.m. Saturday and include a series of art exhibits, dance and musical performances and craft projects for children.