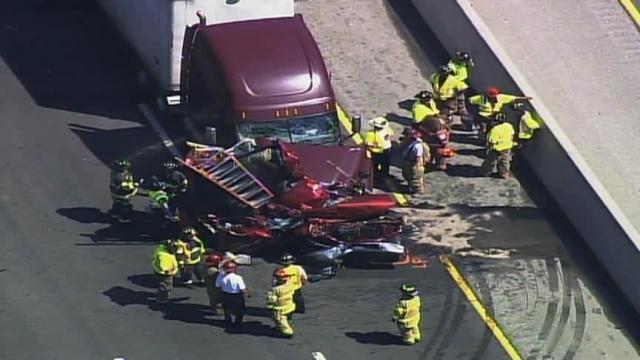 Raleigh, N.C. — A fatal pile-up on Interstate 40 near Chapel Hill last month occurred when a truck driver slammed into the back of a line of stopped traffic, according to a Highway Patrol report released Thursday.

Troopers say Ronald Eugene Graybeal was driving west on I-40 near U.S. Highway 15/501 on June 30 when he crashed into four vehicles, killing three of the drivers.

An investigation by the Highway Patrol determined that the four vehicles were stopped in heavy afternoon traffic and had just started to move when Graybeal's tractor-trailer hit them at 65 mph. The chain-reaction wreck that ensued caused one vehicle to burst into flames.

Gary Dwayne Smith, 45, of Burlington, died in the burning vehicle, and John Hall Llanio, 38, of Kannapolis, and Barbara Boda Caldwell, 64, of Mebane, also were killed in the crash.

Troopers have upgraded the charges against Graybeal, 50, of Newport, Tenn. He now faces three charges of felony death by vehicle. He initially was charged with one felony and two counts of misdemeanor death by vehicle.

They also have charged him with failure to reduce speed. He already faced charges of driving while impaired and possession of marijuana, methadone and drug paraphernalia.

Investigators said he was under the influence of drugs at the time of the wreck.