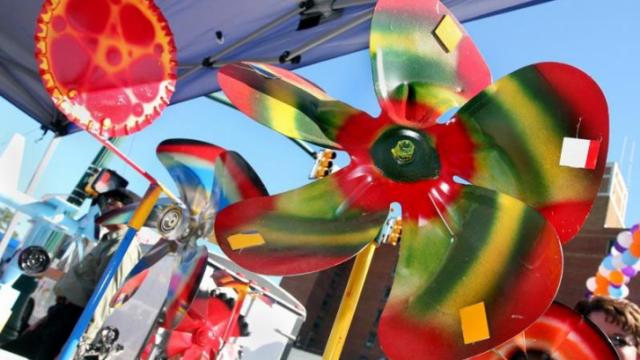 Wilson, N.C. — The National Endowment of the Arts has awarded Wilson a $250,000 grant to help develop a downtown park dedicated to the whimsical whirligigs created by local artist Vollis Simpson.

"I'm so excited I can hardly stand behind this podium," Mayor Bruce Rose said Wednesday in announcing the grant and the plans for the park.

Rose and other local officials said the park – a 2-acre lot bordered by Goldsboro, Douglas and South streets – will boost local tourism and revitalize downtown Wilson, including an emerging arts district.

Wilson will be the only town in the U.S. with a whirligig park, officials said.

"People are going to be detouring here off of (Interstate) 95," said Mary Regan, executive director of the North Carolina Arts Council.

Simpson, 92, has built his elaborate spinning works of art for years. His creations have been features in museum exhibits from Baltimore to Atlanta, and four of his whirligigs are on permanent display in Atlanta's Centennial Olympic Park.

"I didn't ever think this would ever happen," Simpson said of the Wilson whirligig park.

Money from other grants already is being used to repair and restore some of the whirligigs, which are slowing down with rust and age.

No local tax dollars will be used to develop the park, which Rose said should be open sometime in 2013.

"People from all over the country are going to show up here," he said. "People are going to come to downtown Wilson to see this park."