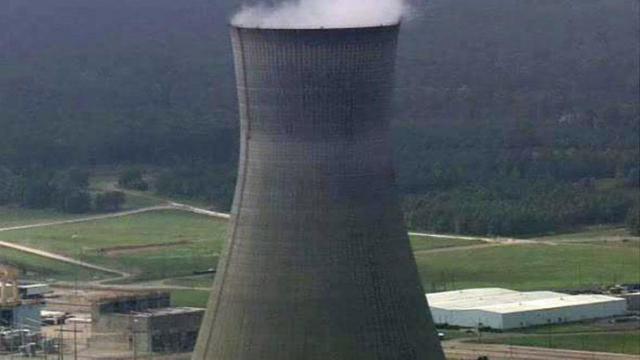 New Hill, N.C. — A 526-foot cooling tower that emits 10,000 gallons of water vapor per minute is the face of the Shearon Harris Nuclear Plant in southwestern Wake County, but the Raleigh-based utility that owns the plant says safety measures are at its heart.

In March, a powerful earthquake off the coast of Japan hurled a tsunami onshore, damaging nuclear reactors at the Fukushima nuclear plant and sending radiation into the air.

The nuclear disaster has prompted Progress Energy, which runs the Shearon Harris plant near New Hill, to re-evaluate its safety program.

Vice president of the Shearon Harris facility Chris Burton said that, when it comes to safety, redundancy is key.

"(We) have two pumps, two motors, two diesels, two valves so that, if any one piece of equipment were to fail when needed, (we) have a completely separate available system," Burton said.

In the control room, among the hundreds of dials, screen and meters, there are even two kill switches.

Burton said there are many reasons that a nuclear disaster like what happened at Fukushima is unlikely to happen at Shearon Harris, but it's still a top priority to take every possible precaution.

"We calculate the risk every day," Burton said. "Maybe we haven't thought of every possibility, but we'll certainly go down every path we can think of."

He said the plant is able withstand hurricane winds up to 179 mph and an earthquake registering in the 6 range on the Richter scale. He also said that a failed ventilation system caused many of the explosions at the Japanese plant, but Shearon Harris' vents have a different design.

Nuclear reactors create heat from uranium, which ultimately produces electricity through nuclear fission. After that process, long metal tubes containing the used uranium material must be cooled and stored to prevent them from releasing radiation.

Progress Energy keeps its spent fuel rods in cooling pools; some rods have been underwater since the late 1980s, Burton said. Unlike Fukushima, where the damaged reactor caused fuel rods to overheat, nuclear waste is not stored in the same building as the reactor at Shearon Harris.

"The likelihood of having both buildings harmed is much lower," Burton said.

The facility has been in operation since 1987 and is licensed for another 35 years.