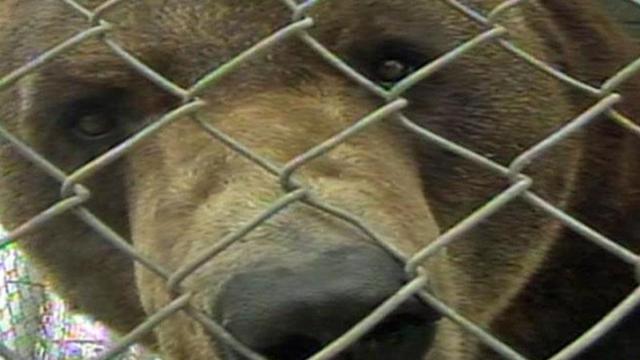 Fayetteville, N.C. — A Fayetteville ranch owner responded to allegations Tuesday that a bear he keeps in a chain link and concrete pen on his property is being treated inhumanely.

Ben, a 550-pound black bear, has lived in a 22-by-12-foot cage at Jambbas Ranch on Tabor Church Road since 2006, owner James Bass said. He lives off a diet of dog food and bread and attracts visitors to the ranch, which also houses goats, turtles, llamas and buffalo.

"People come to see the bear," Bass said. "We're a working ranch. We don't pretend to be a zoo."

The animal rights group People of the Ethical Treatment of Animals, however, has alleged that Ben's living conditions are cruel. Celebrity PETA activist Bob Barker, former host of "The Price is Right," wrote a letter to the Cumberland County Board of Commissioners last week calling the bear's treatment "miserable and unnatural."

In his letter, Barker said that in videos he has seen of Ben, the bear paces frequently as if to express frustration and stress.

Bass, however, said Ben only paces when people gather around him because he expects them to feed him.

"I don't think he's unhappy," Bass said. "He was born in captivity."

In January, Bass was cited for keeping exotic animals, but he successfully petitioned commissioners to change the county ordinance to exempt the ranch, which has been in operation for 18 years.

Commissioner Charles Evans said he went to see the bear's pen first-hand and believes the county made a mistake in changing the law to accommodate just one business.

But he said commissioners are unlikely to revisit the decision unless the community gets involved.

In the meantime, Bass said he's raising money to build a larger enclosure for Ben and provide him with more stimulation.

"We're looking at a tank with some fish in it that he could chase," Bass said. "I don't know if he'll be able to catch them, but he could chase them."